Balcony in a private house 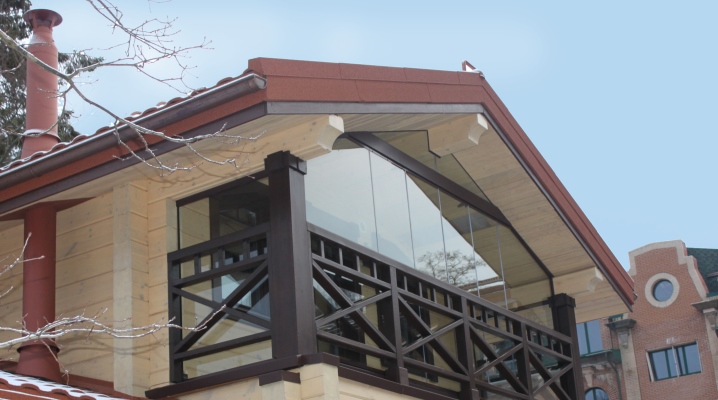 A beautiful and cozy private house on the 1-2-3 floors can not be imagined complete if it does not have a balcony. Beautiful and varied in form, area, glazing, insulation, placement, balconies delight the eye and give the house its unique appearance outside. Of course, not only its external appearance is the goal, it also carries a number of functional loads that increase the value and dignity of the house in general. 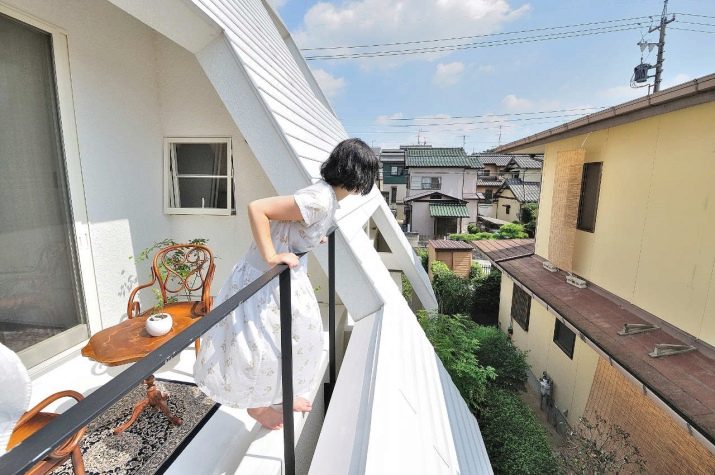 It must be remembered that the construction of a balcony for a finished building can lead to high costs, so its design should be carried out together with the general layout of the house. The balcony can become a zone of increased danger, so it is better to entrust its design and construction to specialists. 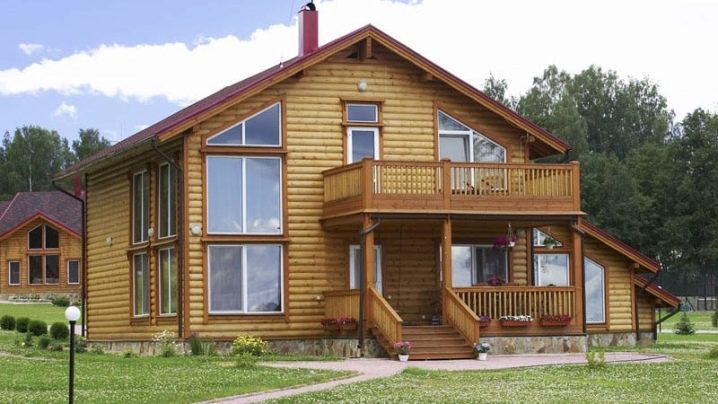 A balcony extension can also serve as a place for recreation, entertainment, and even as a workplace for a creative person. Many books and scientific papers written by thinking people sitting in chairs and lounge chairs on the balcony.The balcony can serve as a roof over the porch, protecting it from rain, snow and other effects of natural and human factors. The balcony, installed above the veranda, helps to divide the facade of the house into two parts and creates the effect of a large air space and increases the apparent volume of the house. 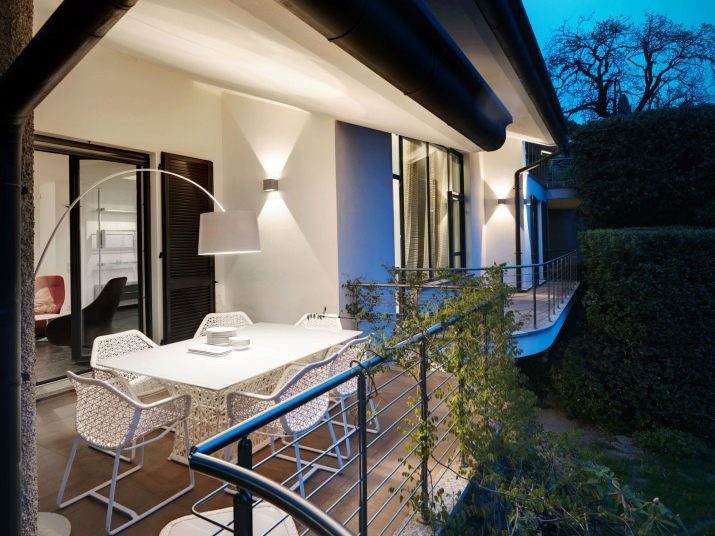 And one more thing - fire. This refers to the possibility in case of emergency to evacuate through such an emergency exit. 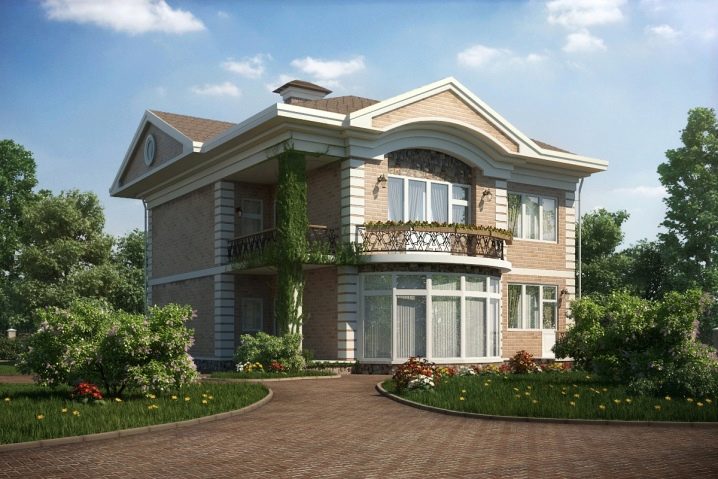 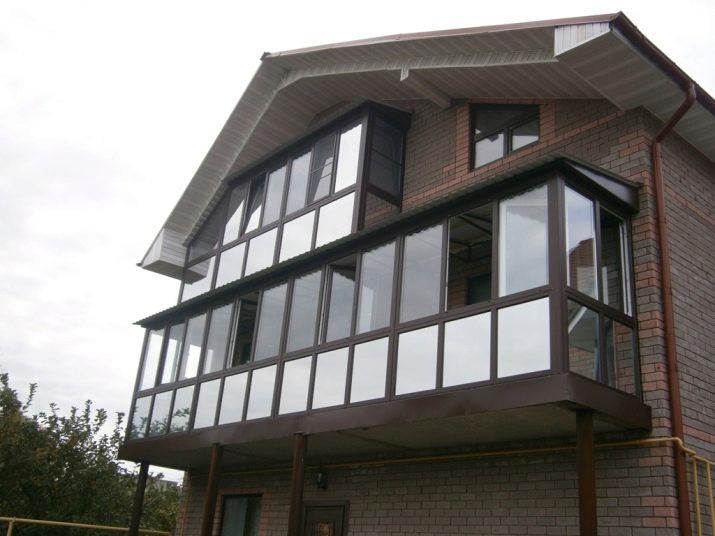 This is the most common type, but just requires a special approach. The concrete base of the balcony is quite heavy and gives a significant load on the walls of the house. If the walls are not massive enough and there are doubts about their strength, put additional supports.Of course, they must be in good performance and consistent with the overall design of the house. 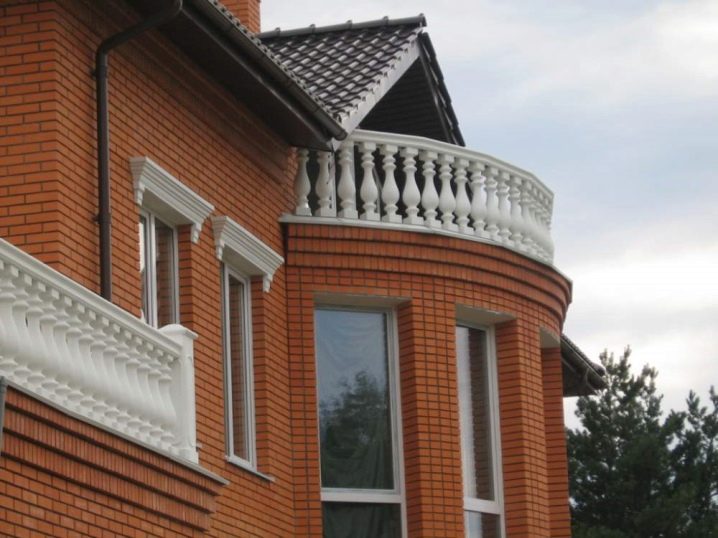 Balcony plates can be attached to the wall of the house in various ways:

Departure and depth of the balcony on a concrete base with a seal in the wall should not exceed one meter, the angle of the balcony slab from the horizontal position must be about 2%. It is necessary to mount a water-repellent coating on the surface of the concrete slab, which must be closed with a cement-sand screed.Metal racks are welded to the embedded steel elements, you have to worry about their artistic form in advance when deciding on the overall design. 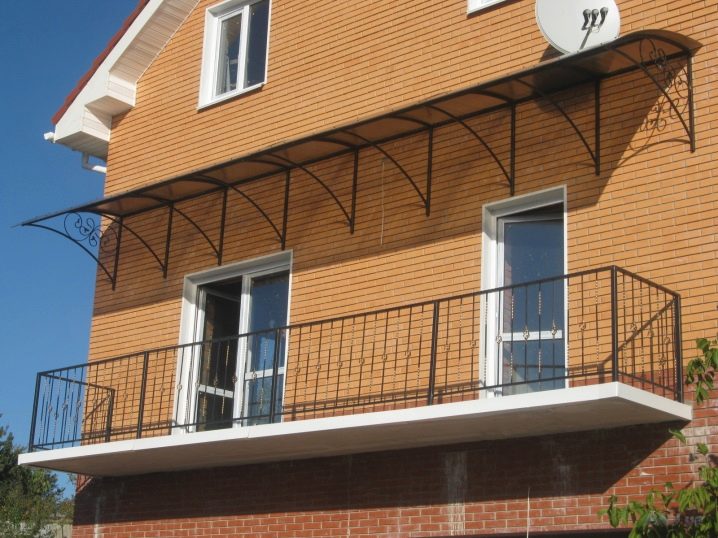 The handrails of the parapet are attached to the risers, the ends of the handrails are securely inserted and fixed in the supporting wall. The height of the parapet is not less than 1 meter. Art metal crate balcony should not have the size of the cells that are dangerous to children. The balcony door should have a threshold height of 10 centimeters. 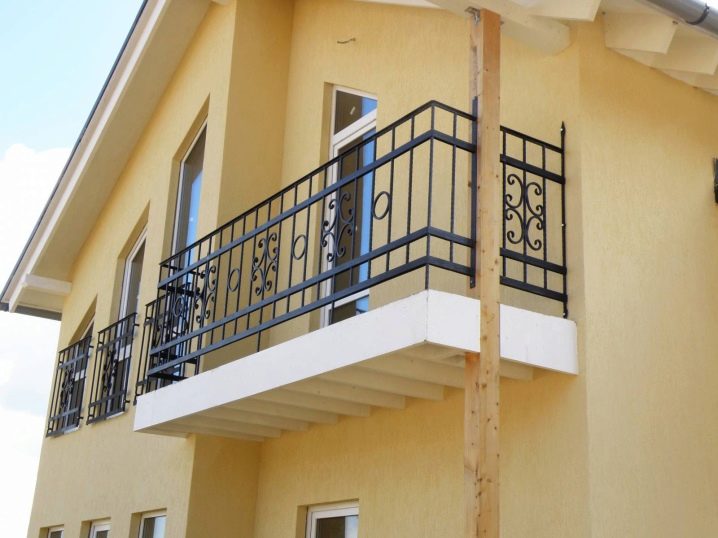 The word “bay window”, rarely used in everyday life, does not even make many people think, like many foreign words. This word means one thing is a balcony-type construction protruding behind the facade of the building. Almost the same glazed balcony, but inside is a continuation of the room. The form of bay windows is any, it is a huge field for fantasies and real incarnation. 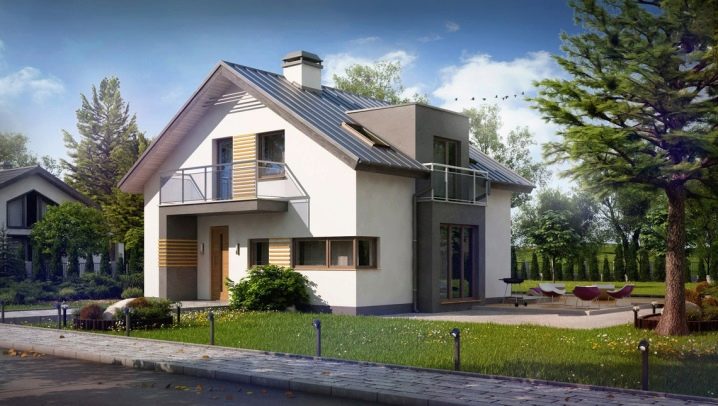 There are various types of designs: rectangular, semicircular, with a set of edges, separated and solid windows, colored, mosaic and many others. The bay window is part of the wall of the house; it is not an extension element and the base under it is the same as the house uses. Above the bay window, part of the construction is performed in the form of slopes,but here they are also trying to make some kind of supplement in order to differ from the neighboring house. Often above the bay window you can see something similar to a turret. The bay window is very well hidden outside under the roof, usually a gable. 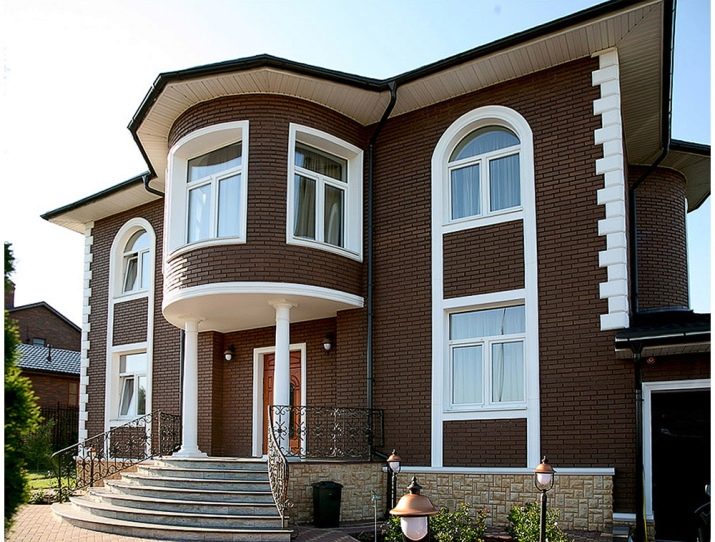 One of the main functions of the bay window, however, like the balcony, is in changing the shape of the interior, in increasing its area and illumination due to additional windows. The interior decoration, design, and furniture of the bay window makes it possible to turn this small corner of the room into a fabulous residence. It all depends on the desires and tastes of the owners of a private house. 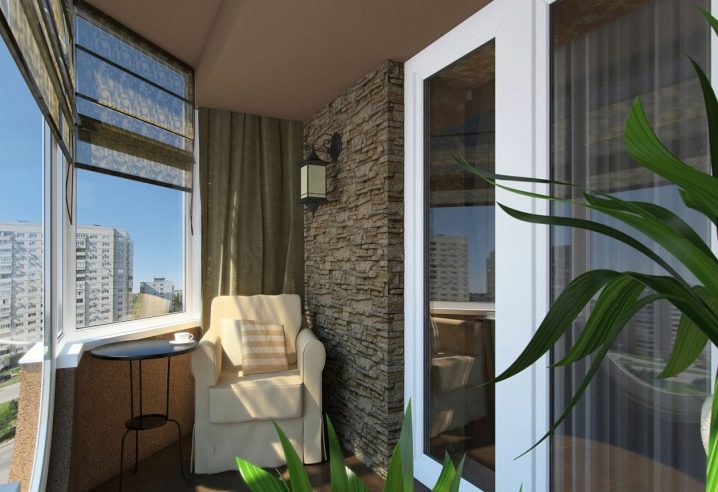 First, we manufacture beams, for which we use a timber of 10x20 centimeters. The beams will become the bearing elements of the balcony. Beams are impregnated with a solution of DL-3 and covered with waterproof materials. At a depth of at least 25 cm every 80 cm, the beams are attached to the bearing wall with steel corners. To beams need to attach the rack of wooden bars 4x10cm. Then we stack and fix the boards of 6x9 centimeters to the cantilever beams at a distance of 30x40 cm between them. Next, we lay a floor of 40 mm boards.

Fence of 3x13 cm planks is fastened with screws to the posts, we attach wooden handrails of 4x9 cm in size to the posts and fix them firmly in the supporting wall.On the wooden handrail should not be scuffed, irregularities. The entire surface of the handrails must be carefully sanded and coated twice with a water-repellent, frost-resistant varnish. All elements of a wooden balcony are either oiled or treated with hydrophobic paint. 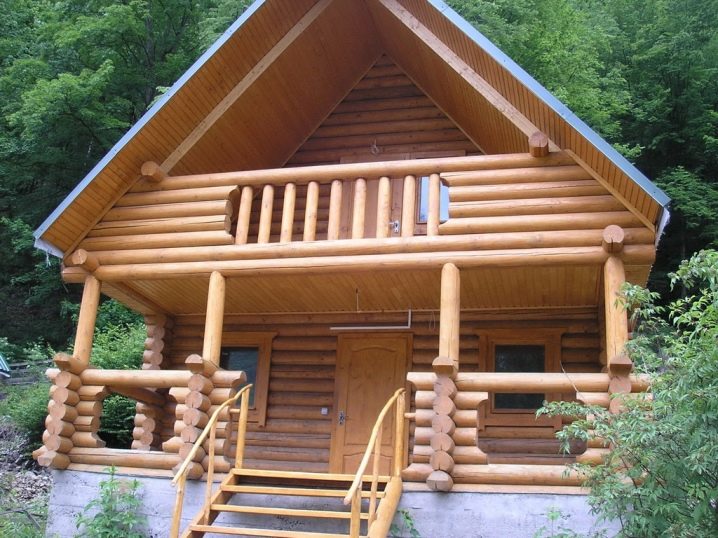 It is always desirable that cantilevered structures rest on vertical column columns in order to ensure structural stability for a long period of time.

A bit about the French balcony

As a rule, a balcony in a private house is open to be closer to nature, to a fresh influx of forest air, to the smell of herbs. But there is also a closed type, the so-called "French". In a private house you can decide on the installation of various options extensions in accordance with the tastes and prosperity of the owners. Closed, fully glazed with a wrought iron grille, with beautiful windows made of transparent or tinted glass, stylish framing, such a balcony will decorate any home. 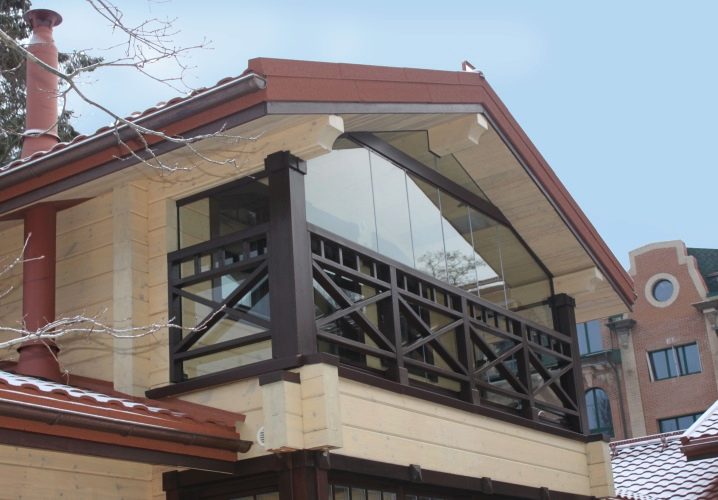 But there is this one feature. We do not tie the balcony to the general view of the house, but on the contrary, we still have to coordinate the entire exterior design with the future French balcony at the design stage of the whole house.Detailed step-by-step instructions for such a design is a separate complex topic. It is necessary to coordinate the design of the room associated with the French balcony, their interior decoration, color scheme. All these themes are for the inspired work of artists, designers, creative blacksmiths to create genuine masterpieces.

Peaks or canopies to some extent protect the balcony from rain, snow, falling leaves. There are several types of sheds: 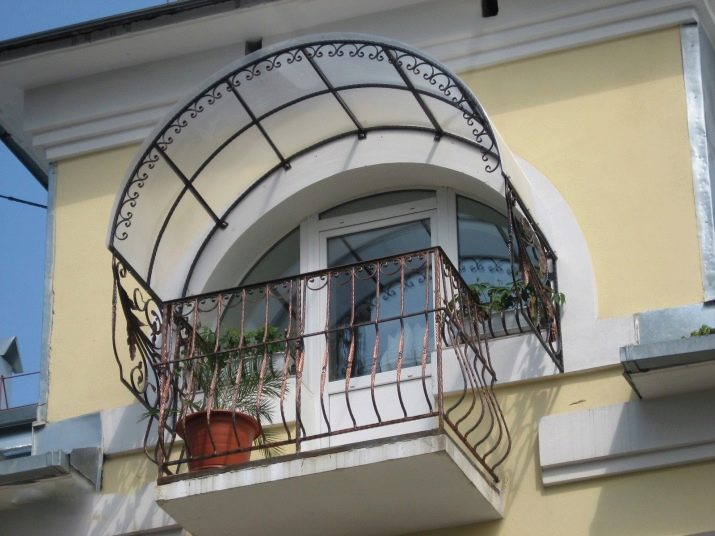 Choosing your building from a wide variety of options will allow you to solve many functional tasks, give individuality to your beloved home and for many years will create the preconditions for a good rest near nature. 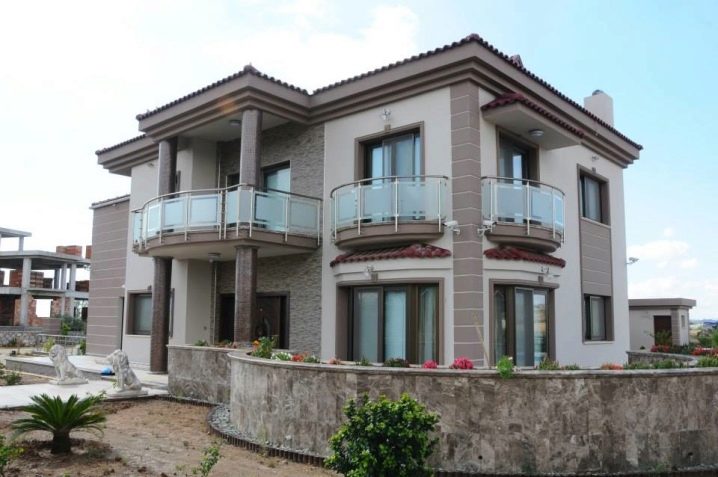 Interesting in the section "Balconies"

How to make a warm floor on the balcony 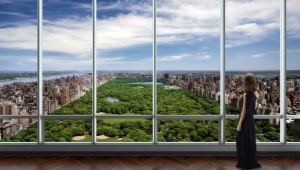 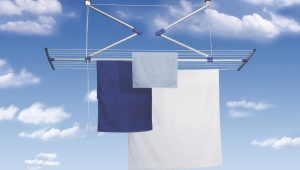 Balconies Ceiling dryer on the balcony for linen

How to make a balcony with your own hands

Glazing of balconies in "Khrushchev"

Wall-mounted clothes dryer to the balcony 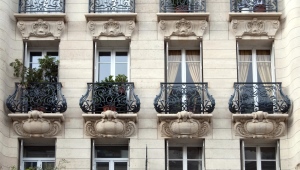 Finishing the loggia with plastic panels