Garden arbors: beauty and comfort at your cottage 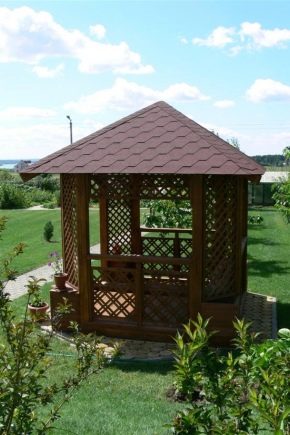 If the owner has a backyard territory, he probably would like to set up a small, picturesque garden for recreation there. However, it is better to relax under a canopy and with proper comfort. Therefore, a garden gazebo - although not strictly mandatory, but very important detail. 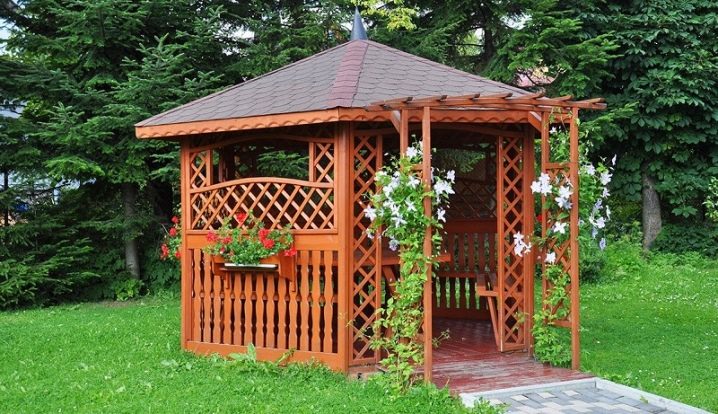 Each of the readers probably imagines what a building of this type should look like; however, it is very likely that everyone represents it in a different way, because there may be many variations of the structure.

The presence of an arbor of any type provides the owner with a number of advantages:

Arbors can be classified according to a number of features.However, the most global is the classification of the actual type of construction.

Therefore, the criterion is divided into three main types of structures:

In fact, this is a real house, only consisting of a single small room.

In addition, according to the method of construction gazebos are divided into built and prefabricated. The first ones are constructed from ordinary building materials, while the second ones are assembled from ready-made parts created according to the design method and involving the assembly of a particular structure.

Since the construction of an arbor almost always turns out to be much lighter than the construction of a large residential building, it can be constructed from a variety of building materials. At the same time, it is worth highlighting at least the top three, which are used as often as possible to create the framework.

In the case of the construction of a serious structure for many years of year-round use, wood is usually only an auxiliary material.

In summer, this design is very hot, and in winter it is too cold.

Finally, if we are not talking about an expensive forged product, it is rather difficult to impart aesthetics to such a structure: metal arbors are usually only summer, with a minimum of walls — supports and a roof.

Brick gazebos almost always make glazed, it makes sense to carry out all the necessary communications here, since it is, in fact, a house in miniature.

As for the roof, it can be made of the same material from which the walls are made, and of special roofing materials.

Tiles and other types of the roofing itself are usually used to create capital structures, while wooden and metal summer structures usually cost a minimum overlap of a material similar to the wall.

The floor of the gazebo may be completely absent, representing an ordinary garden soil with grass, however, such a solution is appropriate except for very light structures. Often it is, again, made from the same material as the whole arbor., although, if desired, it can also be covered from above with a floor covering - linoleum or laminate.

Garden gazebos are only rarely divided into several rooms, but in some cases zoning of the space is appropriate even here. The simplest gazebo usually involves just a place in the open air for a table and chairs, but in recent years more and more owners prefer to combine this building with a summer kitchen and a full-fledged family dining room.

All this, of course, affects the size of the structure.

In order to make the room not too crowded, it is necessary to provide at least two square meters for each potential visitor (taking into account the table and the space from the edge of the shed, so as not to fall under oblique rain if there are no glazed windows).

If there is also a kitchen area in the gazebo, you need to have a fireplace at a distance of at least one and a half to two meters from the last person sitting at the table, otherwise it does not make sense to make room for cooking from the house.

As for the shape of the structure, the three most popular options are:

The hexagon looks best in a wooden version, but it is possible to use such a form to create light metal hinges like a tent.

The task of determining the design of a gazebo rests entirely on the host’s shoulders, but the tendency of the past decades has been the desire to decorate a garden house not too elaborate, but at the same time quite stylish and original. Here, of course, it all depends on the material from which the arbor is made.

For example, in many cases, a wooden gazebo is only varnished, but not stained - the natural look of the tree itself is aesthetic.The metal frame, on the other hand, is almost necessary to be painted, unless it is a forged masterpiece. Nobody paints a brick at all - here you will have to depict decorations with either an unusual form of masonry, or combinations of individual bricks of different colors.

The original options may relate to differences in the smallest details. For example, even the most unpretentious gazebo will look completely different and very unusual if the gardener manages to cover it with climbing plants. Creating a design of this type can take more than one year, and it looks picturesque only in the summer, but it provides additional shade and makes people even closer to nature.

The bright color of the arbor slightly increases the festive mood, but here it is very important not to overdo it. A solid construction must be in harmony with its surroundings.and if the owner chose to choose a multi-tone color, all these colors should be combined with each other. Often, gazebos are specially painted in contrasting tones, and although such a decision may look a little childish, it at least helps to distract from everyday routine.

Recently, more and more prefer the arbors in the Arabic style.. The easiest way to design them is to use traditional colors - gold painting on scarlet or deep blue, less often - on a green background. In general, the coloring is not a monophonic background, but at least simple drawings, is only welcome, because it makes sense to use the talent and creative impulses of familiar artists, if they agree to work on such a project in the summer cottage.

As for the architectural elements themselves, even in such a simple structure they can be somewhat unusual. It is possible to emphasize the natural conditions due to the partitions between the supporting pillars made of woven wicker. Several decorate window openings, as well as the door, will help graceful arches, which will reduce the number of corners.

The interior can also advantageously complement the image of the gazebo. If the gazebo is made of wood in particular, then the furniture is better to choose a clearly garden one made from natural materials.

In all other cases, it is necessary to focus on the integrity of the color scheme of the building and the comfort of visitors to the garden recreation area.

All the above examples are just sketches of how a building for rest on a plot or garden might look like, but the creative approach of individuals can turn an ordinary gazebo into a legitimate subject of pride.

Who loves classics and rustic comfort, he will definitely appreciate such a combined structure made of stone and perforated wooden grids. The capital wall here is the basis for a kitchen corner and protects holidaymakers from constant winds, and the transparent wooden walls allow you to enjoy the breeze and the surrounding greenery. The creators decided not to limit the economic significance of the gazebo only to the summer kitchen - on the reverse side we see a shed for storing firewood.

The second photo presents a fundamentally opposite solution - here we see the desire to look modern, outside the classical canons of architecture. It is very difficult to describe the form of such a building, its floor is a continuation of the garden path, which does not interfere with the comfort of guests and owners - it is both beautiful and convenient. In the background you can even see the kitchen area.

The question of whether or not to glaze windows disappears by itself if the entire arbor is made of glass.Such a construction will not protect from the sun, but if you choose a permanently shaded place, you can feel almost outside the walls.

How to make a wooden garden gazebo with your own hands, you will learn from the video below.

Interesting in the section "Arbor"

The nuances of making arbors from scrap materials 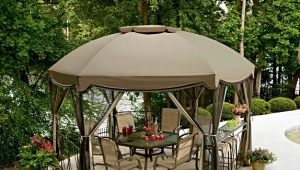 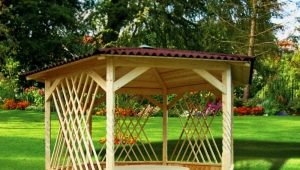 Arbor Gazebo in one day: fast and efficient ways

Pavilions to give: a variety of designs and design

Choosing a project for a gazebo with barbecue

How to make a simple summerhouse by yourself?

Pergolas with barbecue, barbecue and stove 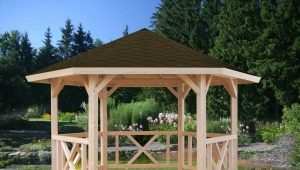 Arbor in the country: ideas for construction and design