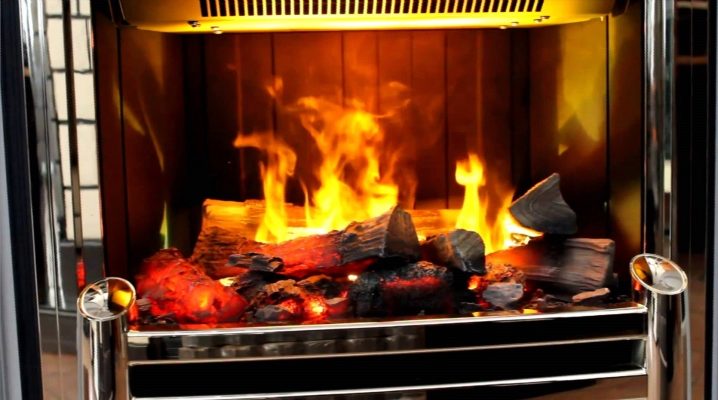 No one is surprised to come to visit the new country house of friends and see a beautiful electric fireplace in the living room. Each homeowner chooses the ideal solution for themselves from the proposed low-cost, compact or powerful electric centers with imitation of the flame. New for sale - a fireplace with a steam generator, which won its place in the sun among other models. 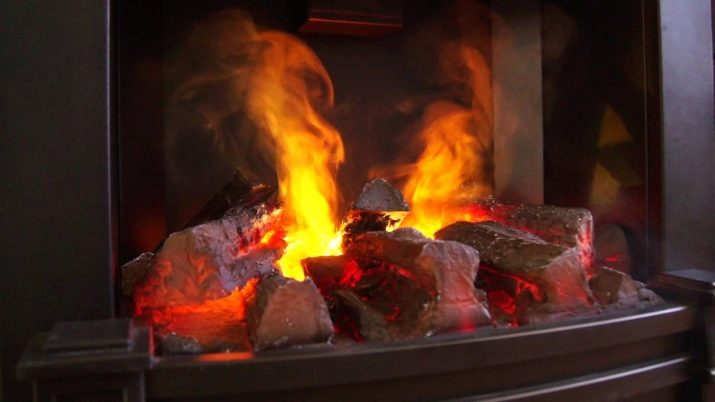 Electric fires lose to fireplaces with a steam generator in one parameter. New items look aesthetically pleasing and warm the rooms, like their predecessors, but there is something that distinguishes them from them: they can moisten the air in the cottage. Performing three fundamental functions favorably affects the house: it turns into a castle. On sale models that look so realistic that people who are ignorant in the fireplace business will take them for real and only when examined close up they will realize that they were wrong. The main thing that is important for homeowners: their installation is possible both in the unfinished and in the newly built cottage. 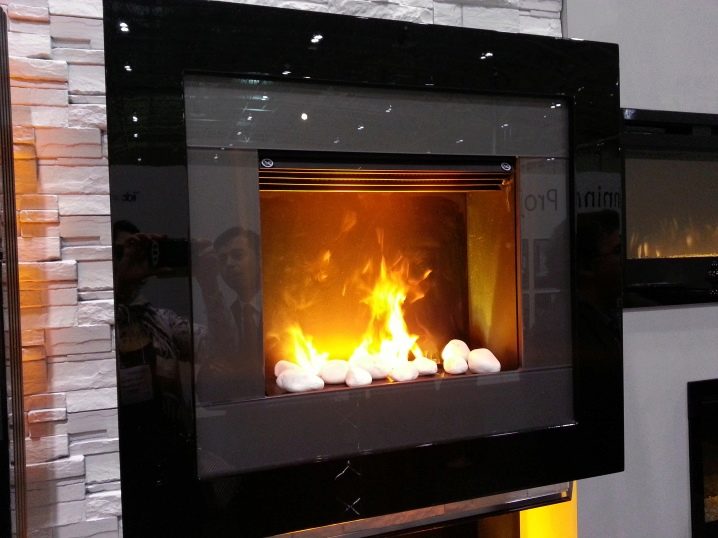 A fireplace with a steam generator is chosen by people interested in creating ideal conditions for living in a cottage. Electric and wood models work like heaters, i.e. remove air from the premises. Because of this, households have a headache, they suffer from colds and ailments. With the new unit, your well-being improves, and besides, you don’t have to take care of it, like a wood-burning model, removing ash from the ash pan and putting wood in the firebox. 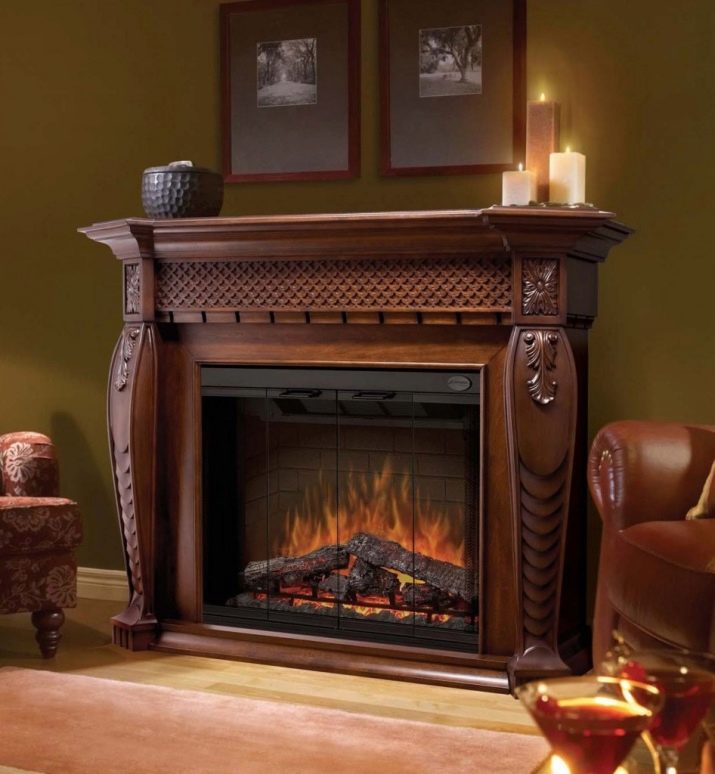 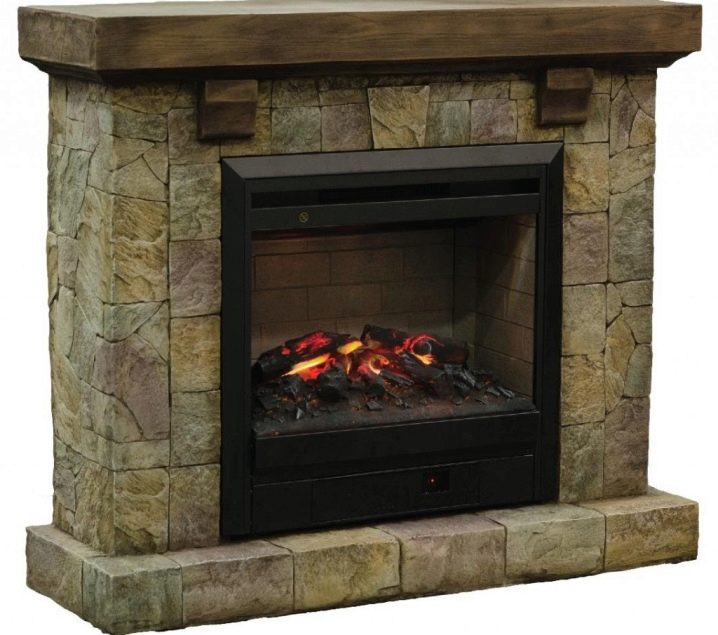 Although the fireplace works with a steam generator immediately after connecting to the 220 V electrical network, they invite a professional to install or do everything according to the instructions. They never act imprudently, setting it up as desired, and, forgetting the instructions, since this is fraught with serious consequences: electrical wiring malfunction, short circuit, fire.

A fireplace with a steam generator, as a decorative hearth, artificially repeats the burning of fire.To achieve this effect, install halogen lamps in the camera. Combining them, create an imitation of the flame on the logs, which are highlighted by them. Built-in ultrasonic steam generator is involved in the process of splitting water into droplets. The resulting vapor is illuminated with lamps, seeking to create the original 3D effects. Due to the presence of heating heaters, the fireplace manages to heat the room. But the way heating takes place, qualitatively or poorly, depends on the power of the unit and its location. Sellers in stores resemble a fundamental rule that is important to observe when choosing: for heating a room with an area of ​​10 square meters. meters required 1 kilowatt of electricity. 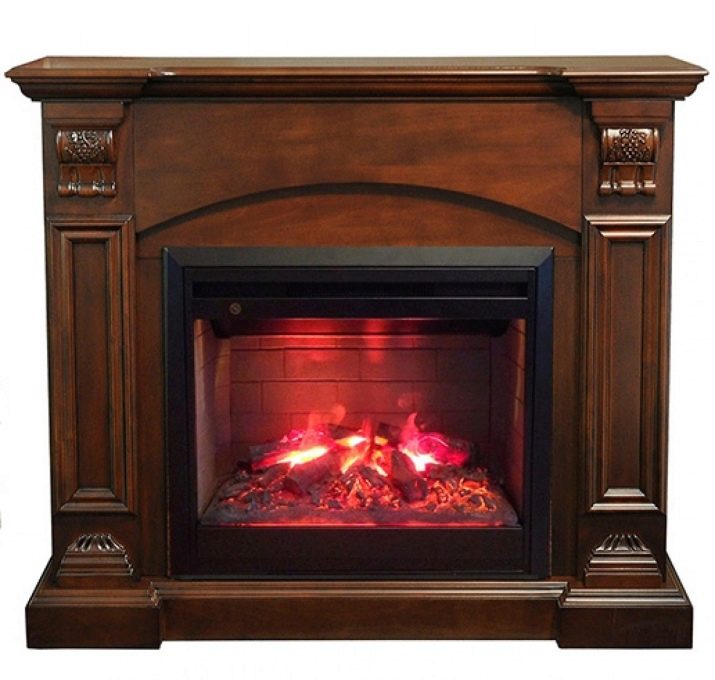 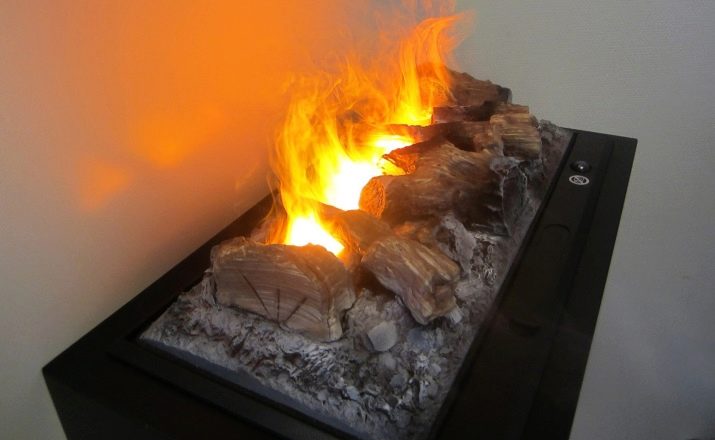 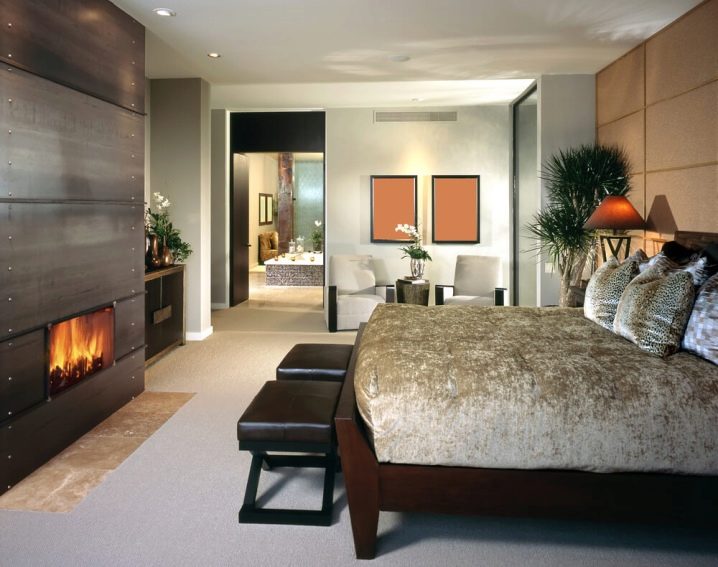 The main reason for not buying a fireplace with a steam generator is not the high price, but the fear of burns that small family members can get. Fortunately, steam is not hot. It is formed as a result of the splitting of water, and it is heated only by lamps that cannot be red-hot. 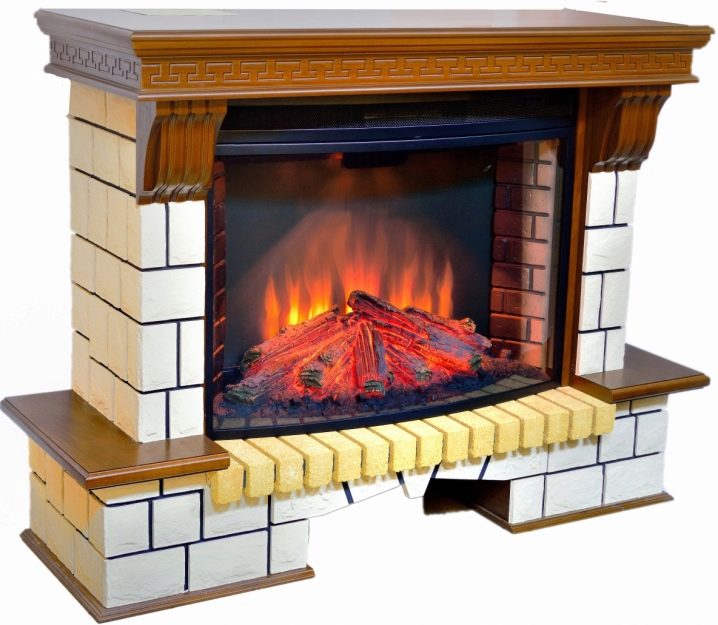 How to do it yourself?

Collecting such a hearth with your own hands, it should be remembered that it works on the principle of generating cold steam and, thanks to a special illumination, imitates real fire. Assembling the steam generating installation, use 5, not 3 lamps. To fulfill your old dream you will need a steam generator, halogen bulbs and a model of firewood.

Material manufacturing portal - metal. For the bath take the case from a broken gas meter. Inside mounted cooler from the video card. For screwing lamps collect a special aluminum platform. By itself, aluminum removes heat well and does not corrode when in contact with water. Curved cover set between the platform with lamps and a bath.It will act as a tunnel to release steam through the lamps to a model of firewood. 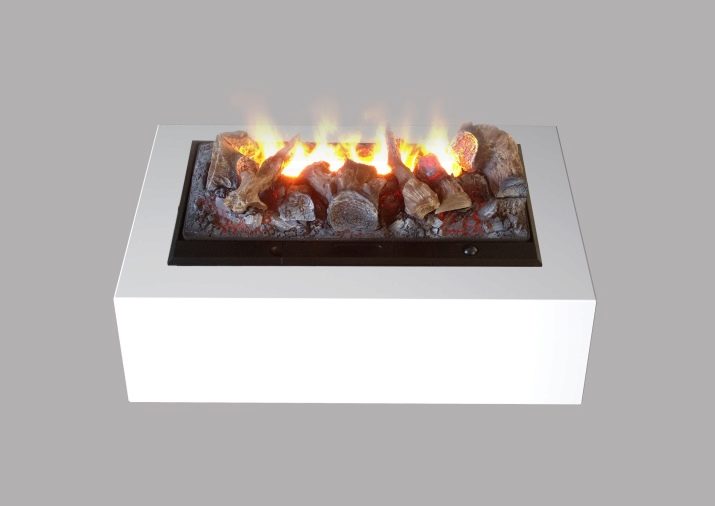 Having collected a portal from profiles with guides 60x27 and 27x28 cm, they do not fix it to the wall. So it is more convenient to carry out plating gypsum-fiber sheets inside and drywall outside. To imitate brickwork, gypsum bricks are bought, for example, by the companies of Monte Alba, which are fixed to the walls with “liquid” nails. The seams between the bricks are sealed with acrylic-based sealant to paint the assembled structure after drying.

Exterior decoration homemade fireplace depends on the imagination of the master. Some install black wrought iron grilles in front of the fireplace insert, while others do not. 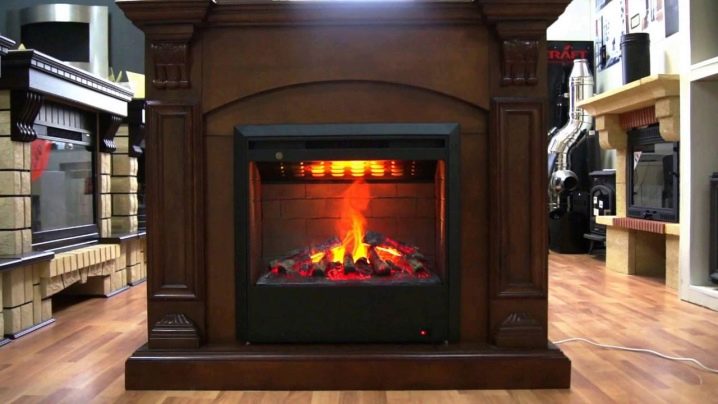 Not all Russians go on the way of self-installation, assembly and installation of a fireplace with a steam generator. Everything that they do with their own hands, they do it conscientiously, in order to eliminate the dangerous moments that led to accidents. If there is no talent and experience in such events, it is easier to buy a ready-made model. A great choice - Dimplex Opti-Myst®. This model went on sale in 2009. Its appearance on the market was greeted with caution, as previously none of the manufacturers used a steam generator in the assembly.Very soon, the model was appreciated, recognizing the right to be called the most realistic in terms of creating effects of the flame, live fire and burning firewood.

In order to realize the long-standing dream of citizens, the company's specialists installed an ultrasonic steam generator in the model to create a cold steam. After heating, it passes through special light filters and becomes visible thanks to the halogen lamps. Steam moves, and the fire is illuminated by orange or yellow LEDs. From the side it seems that the fire is burning brightly in the portal, and from the logs upwards there are real clouds of smoke.

The owner himself sets the parameters of the height and intensity of the exit of the flame. To create the desired temperature mode, he twists the thermostat knob, and for the rapid spread of heat around the room includes a fan heater. 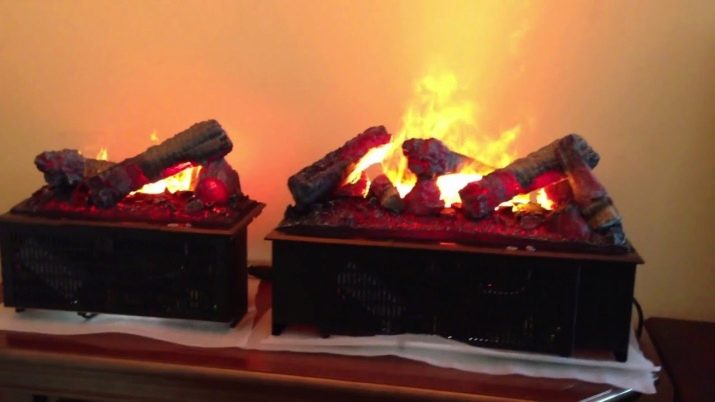 According to reviews the model Dimplex Opti-Myst® does not create trouble during operation, but everyone who purchased it, follow the unspoken rules. Once every 14 days they remove limestone and other deposits from the surfaces of the steam generator. Regularly inspect for the presence / absence of water leakage to prevent short circuits and fire in the house. 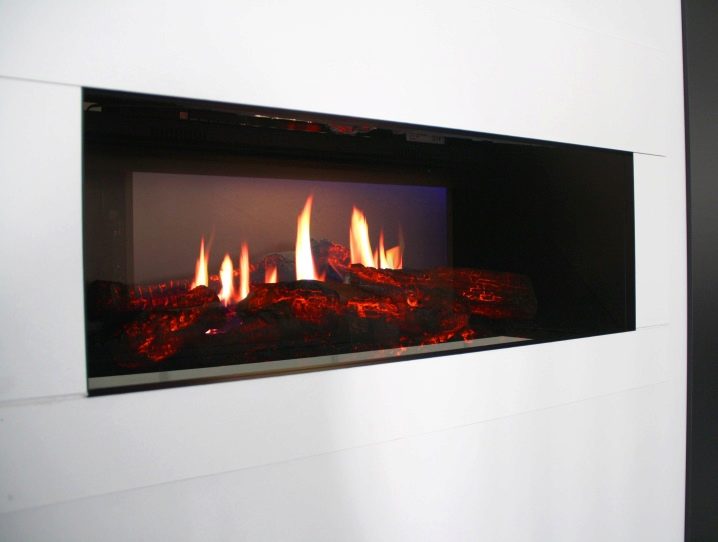 There are people among Russians who, buying a unit, emphasize that they are afraid of overheating. They are recommended a model with protection against overheating. With it, when the critical temperature is reached, one or both of the sensors are triggered, and as a result, the operation of the fireplace stops. Even halogen bulbs frighten them, as they can overheat. What then get a fireplace, to illuminate the portal which use LED lamps, and steam heats a special heating element. 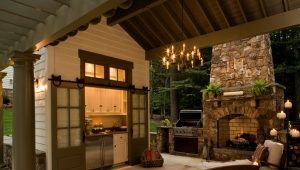 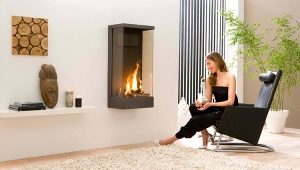 TV over the fireplace in the interior

How to build a fireplace with your own hands?

Mirror over the fireplace 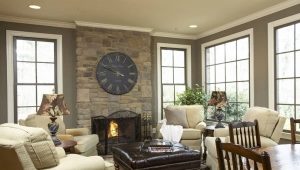 Fireplaces How to choose a clock on the fireplace

How to overlay metal fireplace with bricks