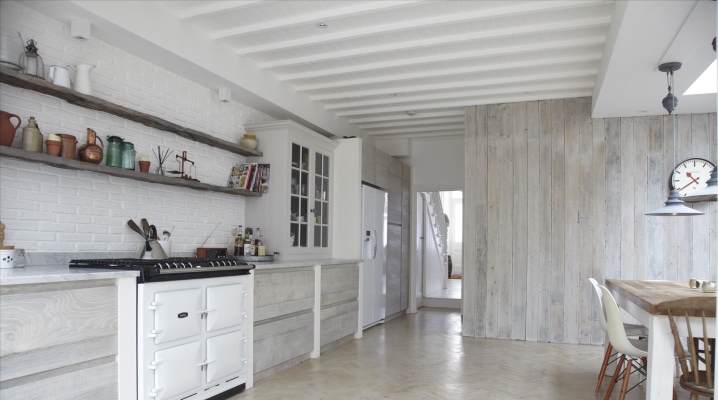 The kitchen is the most visited area of ​​the family members and jealously guarded by the hostess. Each wants her kitchen not only to be filled with all modern cooking facilities, but also to remain comfortable and beautiful. Therefore, you need to take care of the appearance of the kitchen - it consists of not only cabinets, tables, but also ceilings, floors, walls and aprons. We will deal with such type of work as finishing the kitchen wall with laminate. 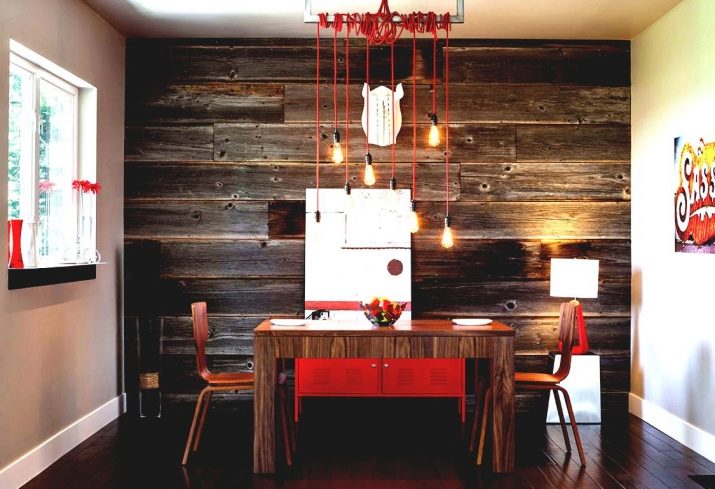 In recent years, the use of laminate found many ways to use. They cover the floors in the hallways, living room, bedrooms and even in children's rooms. Laminate laid on the floor, decorated with balconies, used on countertops. 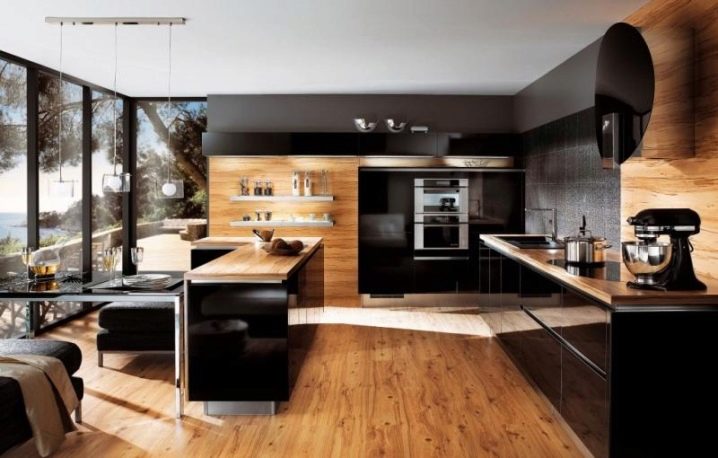 What is so attractive laminate and what is it made of? About his role in the design below. 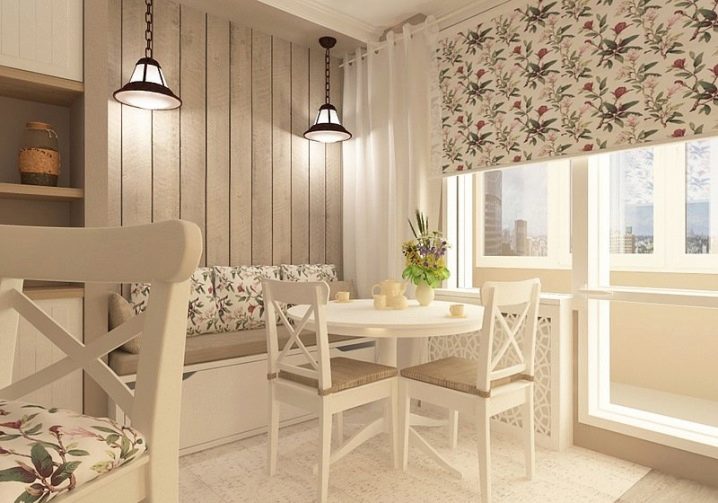 Simply put, laminate is pressed cardboard, but its technology and composition are special. The composition includes fine fractions of wood fibers, which are impregnated with synthetic resins and the entire profile of the panel is formed under high pressure.In all end sides, lock profiles are obtained, with which, when assembling, the joints of the panels become almost imperceptible. 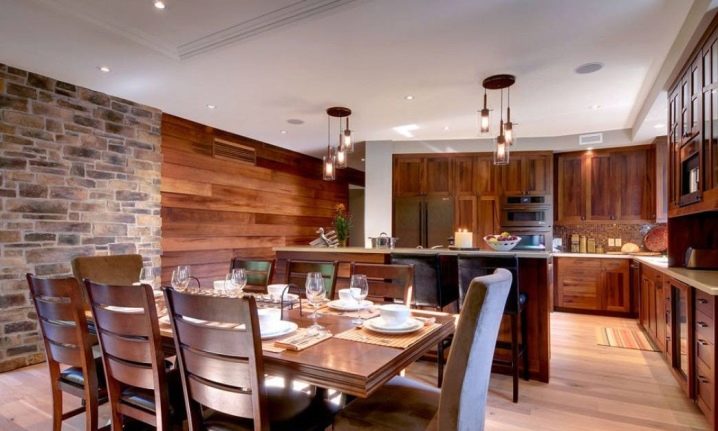 The upper part - with a decorative image, a protective layer of melamine or acrylic film is placed on it. The bottom part is a thick layer of paper with a water-repellent compound. On the more expensive laminates from the bottom, a special layer for sound insulation is applied. The resin-impregnated HDF middle layer is the basis of panel strength. 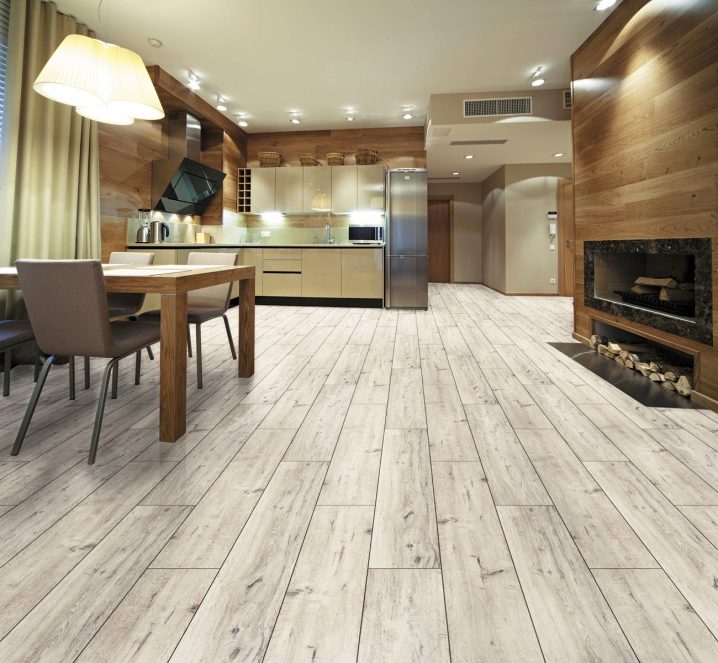 The higher the resin content and pressure in the manufacture of panels, the stronger they are, and the more expensive. 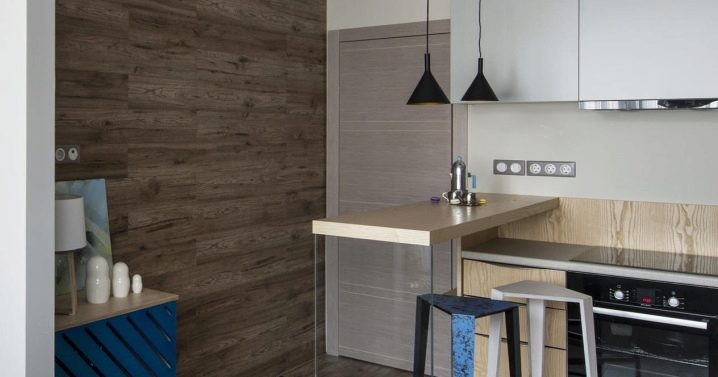 Laminated panels are available in two types - waterproof and waterproof. Waterproof laminate contains more resin and has a higher density, so it is often used as flooring. Moisture resistant laminate is resistant to moisture in rooms, but has lower strength. Laminates of series 21, 22, 23 are used as flooring in a room with a small load and less visited by people. According to the content of formaldehyde in the impregnating composition, these series are the safest and are marked on the eco-label as E1. 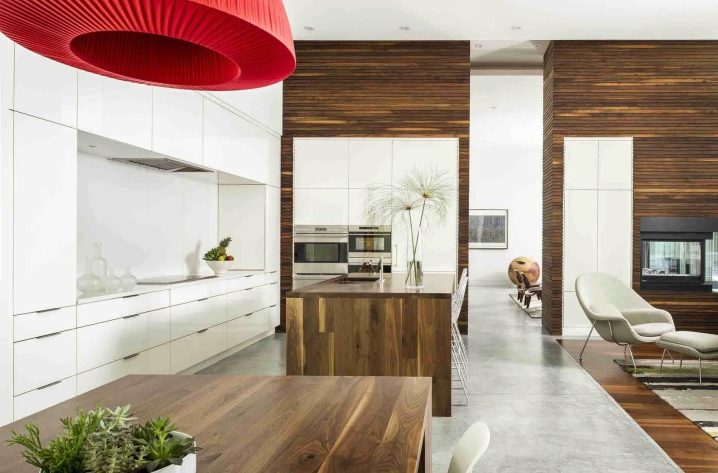 Of course, when laying on the wall in the kitchen it is better and cheaper to use a moisture resistant laminate.

Laying on the wall

Laminated panels can be mounted on the wall in two ways - by adhesive and by assembly on the grid. With the adhesive method, the wall should be well prepared, the irregularities should not exceed 2 mm per square meter. 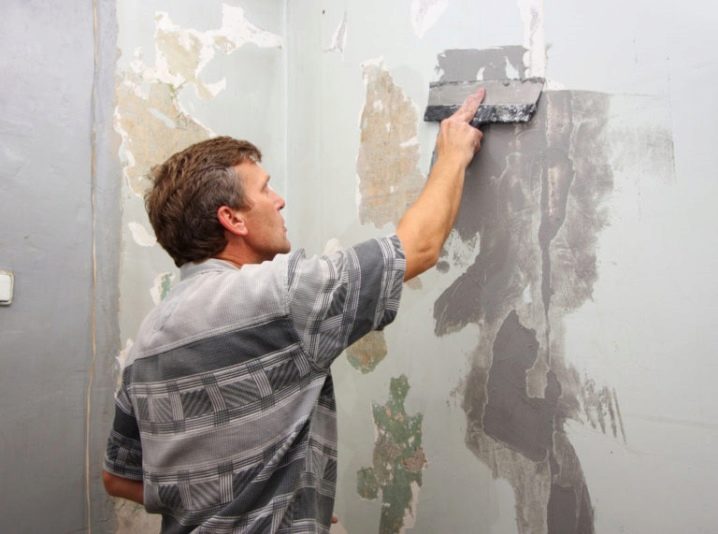 “Liquid nails” are used for fastening and clamps (fasteners) can be used. If you can not align the wall, then make a frequent crate and then the laminate is glued to the rack grid. 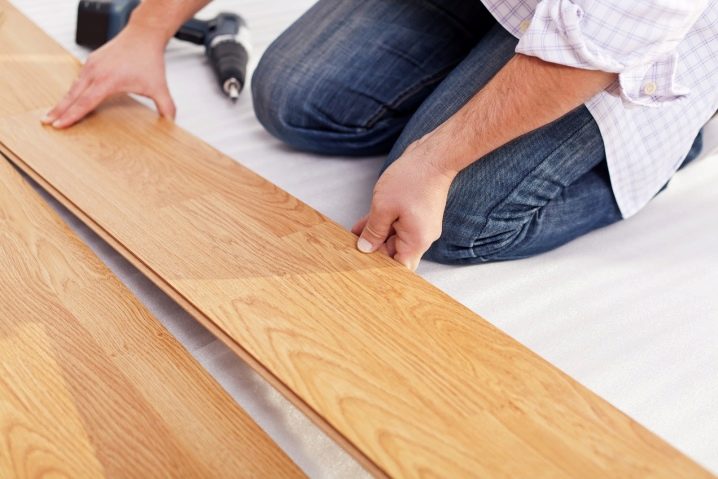 In the second method, the surface of the entire wall or its part is cracked. The grill is carefully prepared with exact dimensions. Depends on the correct installation of panels without gaps and distortions. Especially carefully you need to follow the installation of the first row of panels - control bubble level, and best of all laser. The accuracy of all the others also depends on the laying of the first row. 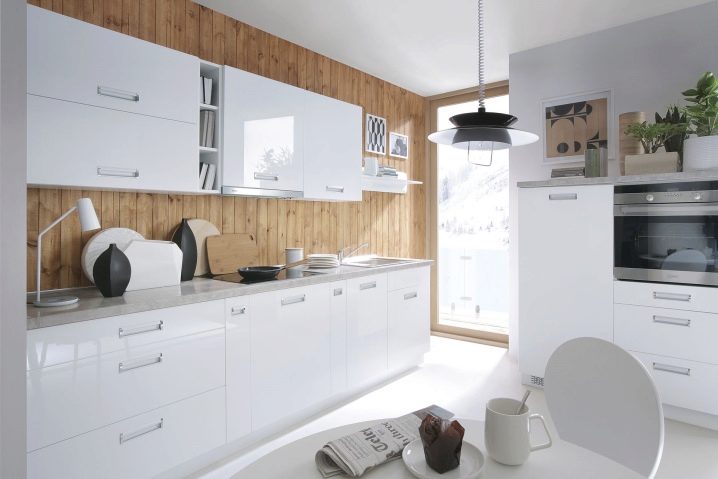 Laminate is so firmly included in a number of finishing materials that no one is surprised by its appearance in the most unexpected places. His appearance in the kitchen was already expected and desired. The drawings under the protective film have a huge number of options in form, location, color,shades. Laminated panels can be made in its form and texture in the most unexpected form. There can be an imitation of a parquet of oak, ash and other varieties of wood, linear, mosaic, in the form of solid boards. 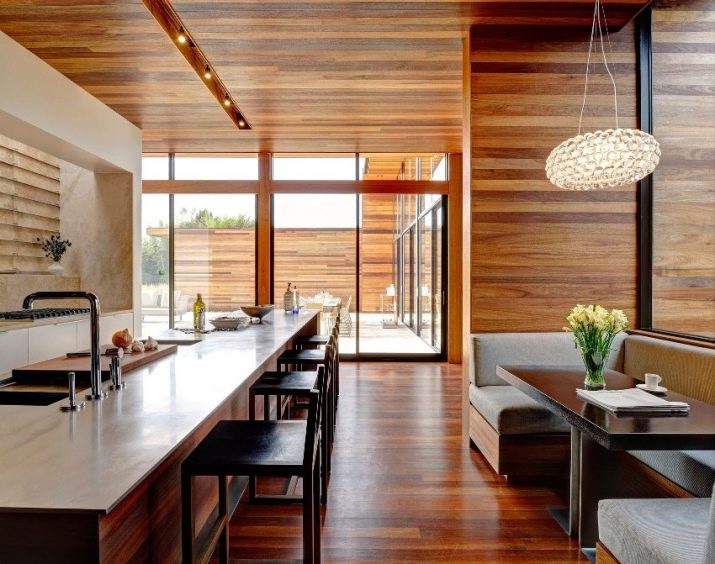 Laminate is made of marble, granite, under wet asphalt, with and without edge. There are plot panels, with landscape, geometric pattern, model and stylish. When choosing, you should consult with the designer and put in such a laminate that would not only solve sanitary tasks, but also decorate the entire kitchen in accordance with the general style of the interior in the apartment. In the kitchen, finishing with laminate is done on the kitchen apron and on one free wall. 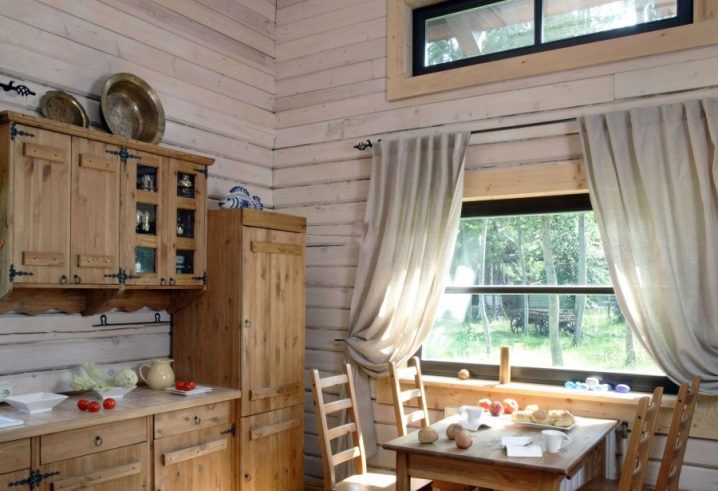 If the installation of the panels is done horizontally, the space expands, but the ceiling seems to be falling. If the ceiling in the kitchen is low, then it is better to lay the panels vertically and thus visually raise the ceiling. 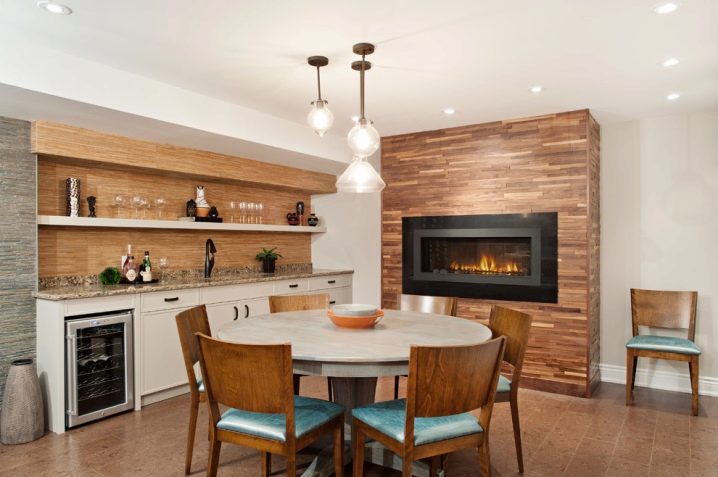 Interesting in the section "Walls"

Oilcloth on the wall for the kitchen 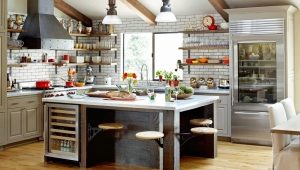 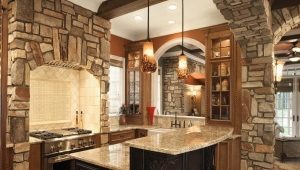 Wall decoration in the kitchen Kitchen decoration with decorative stone

Pictures on the wall for the kitchen 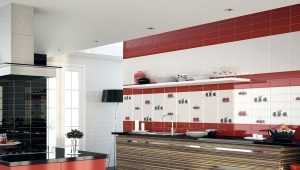 Yellow walls in the kitchen

Niche in the wall in the kitchen