3D-wallpaper on the kitchen: transform the interior 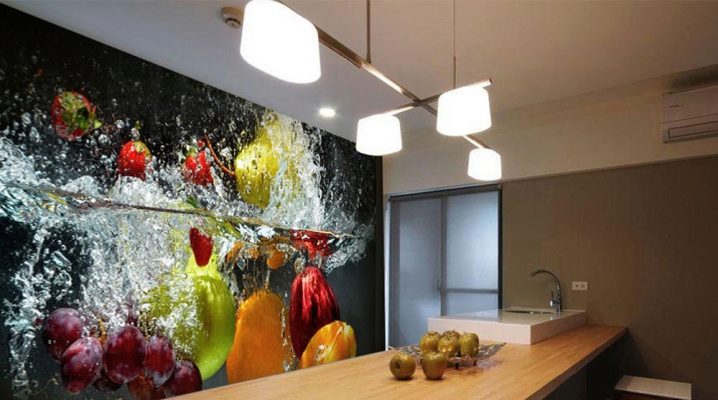 The kitchen is one of the most visited places in the apartment. This is the very room in which the whole family is reunited at the common table. For a long time, the design of the kitchen was strictly subordinated to the needs of purity and simplicity. The modern approach to the design of any premises suggests that elegance should be inherent in absolutely any space, regardless of its functional purpose, especially in the conditions of your own home.

Nowadays, numerous finishing materials have been invented that can decorate the kitchen, but the absolute hit of the last few years is stereoscopic 3D wallpaper on the whole wall.

In fact, in order for the decoration of the kitchen to look beautiful, it is not at all necessary to use stereoscopic finishing materials, however, those that become fashionable. The fact is that in the interior of the kitchen the use of photo wallpapers, which are replete with subjects designed to whet the appetite, remains a popular move: for example, landscapes of warm countries, vegetables and fruits, and flowers.To a man spoiled by modern technologies, there is already too little of a simple image to fully imagine what he saw. That is why 3D effect wallpapers are so popular. 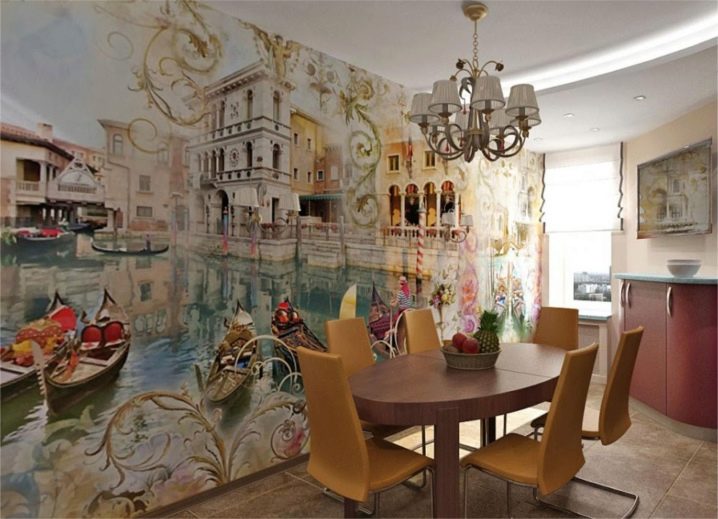 It should be said honestly that the full effect of the presence, of course, is not ensured, especially in those cases when, for example, an orchid, in reality a small flower, is depicted in the entire wall.

In the same time, the image looks much more plausible than on a classic wallpaperand this statement is especially true of landscapes. In some cases, the developers even envisage the design of the material for the walls, allowing you to paste over two or three sides of the room at once so that the integrity of the image is not lost. At a minimum, such an interior enhances the mood, and this is the first step towards appetite.

Finally, 3D wallpapers are also good because Much better than the usual mask surface irregularities. As practice shows, even the purchase of fairly expensive new-fashioned wallpaper can be cheaper than a large-scale purchase of putty and lengthy work on aligning the wall.

Many consumers prefer the wallpaper with a 3D effect, because it is beautiful and attractive, but the kitchen interior details so simply can not be chosen carelessly. In order not to regret further the money spent, attention should be paid to several very important characteristics:

Please note that even a careful wet cleaning and the prevailing conditions still reduce the service life of the wallpaper, so it is better to choose those varieties that consist of several thick layers. 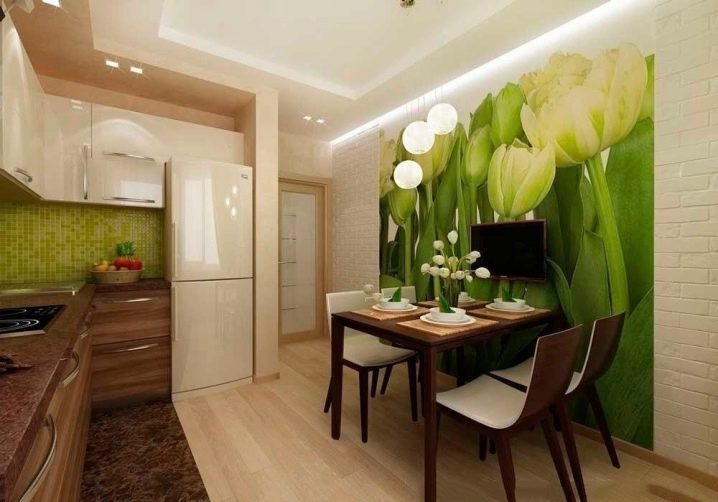 It’s no secret that when choosing a wall design the owner is forced to make a start not only from some personal preferences, but also from the specifics of the room, in particular, from its dimensions. Questions of the correct choice of colors will be discussed a little later, but the plot lines should be chosen correctly, starting from the quadrature. 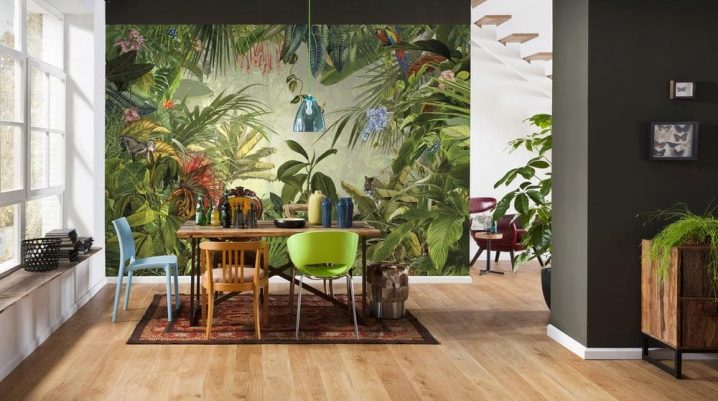 For example, the largest variety of choice offers its owner a large kitchen. Here, abstract rings and quite specific close-up fruits look equally appropriate, as do animal themes or landscapes in different directions: from natural to urban.

It should be remembered that any large-scale canvases are perceived as holistic only if you look at them from a certain distance, so decorating a wall with such a wall, directly under which the dining table is installed, does not make any sense.

It is in large kitchens, by the way, that the most common option is the use of three-dimensional wallpaper, in which they are not glued over the entire wall, but only its fragment, that is, Wallpaper applied as a picture.

A small kitchen makes its owner a good idea to choose a print on the wallpaper that can be used to decorate such a room. Experienced designers advise to give preference to scenes that mimic the panoramic view from the window, because such a solution predictably expands the space, and although it will fit in as closely as possible, it will be a little easier for the family members to feel psychologically. In such conditions, the “food” plots depicted earlier on canvas by famous artists — still lifes — look good.

The key is that it is meant that the painted images, rather than photographed, because photographic wallpapers usually contain the largest image of the object, whereas for a small room large elements on the walls are not needed.

Much more appropriate in this situation will be still lifes simply because they usually depict a fairly large number of fruits or vegetables, due to which each of the elements is not so large.

A small kitchen space can be further expanded with the help of three-dimensional wallpaper, if you add as much light as possible.On a small square, attention should be focused on such an accent, so the corner glued with such material is often framed with a carved frame, and also equipped with additional lighting.

For obvious reasons, three-dimensional wallpaper with geometric patterns are not as popular as their photographic colleagues, however, such a solution can be found. The choice in favor of this option may be dictated by two unrelated reasons. First of all, it is all the same adjustment of the size of the room. For example, drawing with any figures elongated vertically allows to “lift” too low ceilings, and vice versa, flattened forms “lower” it, visually making the wall longer. 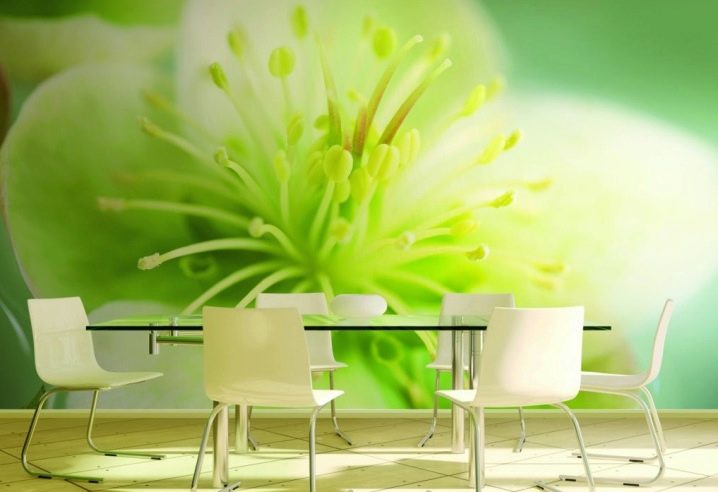 In addition, three-dimensional geometry is often chosen by those owners whose kitchen has a pronounced stylistic bias, requiring just such a pattern. In the second case, the three-dimensionality of the image can replace the relief, which is practically unreal to achieve in an ordinary apartment.

Continuing the theme of room size, it is worth noting that the choice of colors plays a role.So, it is important for a small kitchen to add as much light as possible. This is done, including, through wallpaper on the walls. If we talk about three-dimensional varieties, then the designers recommend to choose for small rooms, especially where there is a lack of light, prints with landscapes with a lot of sunlight in them.

It is natural that with a completely opposite situation, when the room is too large, and even oversaturated with natural light, it makes sense to darken it a little, at least with the help of a painting on the walls, made in dark colors.

The location of the windows in the room is also of great importance, since too much or, on the contrary, not enough light can cause irritation or depression in a person.

Windows to the south involuntarily make you feel a warmth that is not there, so the interior is useful to “cool” with the colors of a cold palette — blue, purple, blue, and so on. On the contrary, if the window openings are facing north, due to the lack of illumination, the apartment residents may develop a wrong feeling about the constantly low temperature, which is not conducive to comfort.

In this situation, designers consider it appropriate to give preference to a warm range with a lot of red and orange, chocolate and honey, and psychologists support them in this.

Besides, It is likely that three-dimensional wallpaper will not be pasted over the entire kitchen, but only one of its walls, which is an accent. According to the rules of interior design, the accent attracts attention only if it is a clear opposite of the rest of the room. 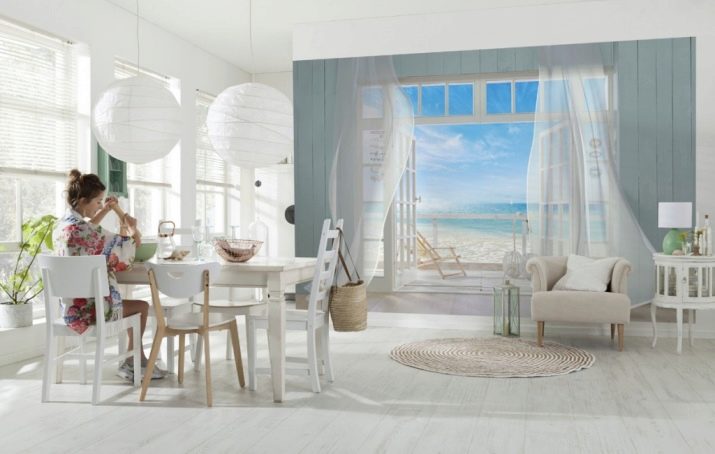 Consequently, in the kitchen, designed in a calm range and without abrupt changes in color, preference should be given to stereoscopic wallpaper with some bright image, and it is not terrible if it does not overlap with something else in the room. In such a situation, even a certain diversity and patchwork of the picture is welcomed.

If the design of the room already abounds with a large number of motley small parts, then the best accent will undoubtedly be something monotonous and calm. This is where the ideal conditions for macro photography are created, but it’s more correct to use not any monochrome images, but light ones - they, unlike the dark ones, do not put pressure on the psyche.

How to glue 3D-wallpaper, see the following video.

Interesting in the "Wallpaper"

Liquid wallpaper in the kitchen

Wall mural on the kitchen, expanding the space 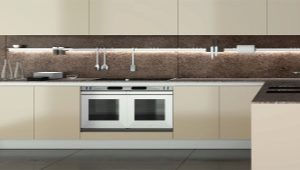 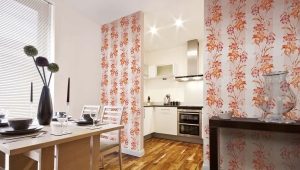 Finishing the kitchen tiles and wallpaper

Vinyl wallpaper for the kitchen 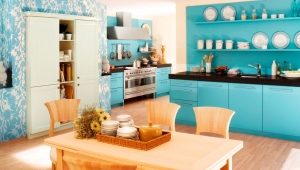 Wallpaper in the kitchen Kitchen design with walls of bright colors

Wallpaper in the style of "Provence" for the kitchen

Finishing the kitchen tiles and wallpaper