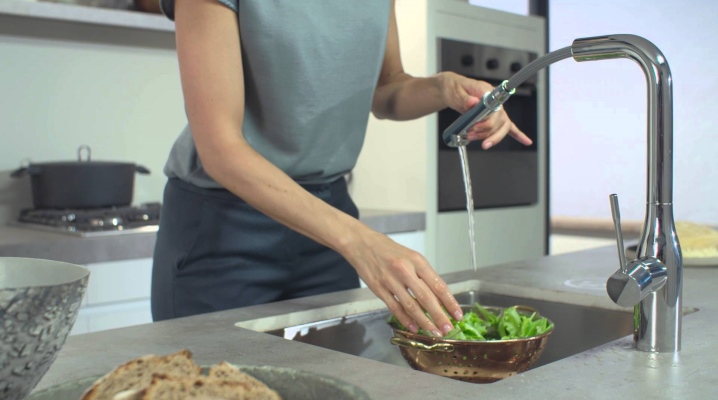 We spend most of our life in the kitchen. Therefore, think over every detail here is especially important. Technical progress does not stand still. Innovation touched such frequently used plumbing products as a mixer. Relatively recently, products with a retractable spout appeared on the market, expanding the capabilities of their fellows. 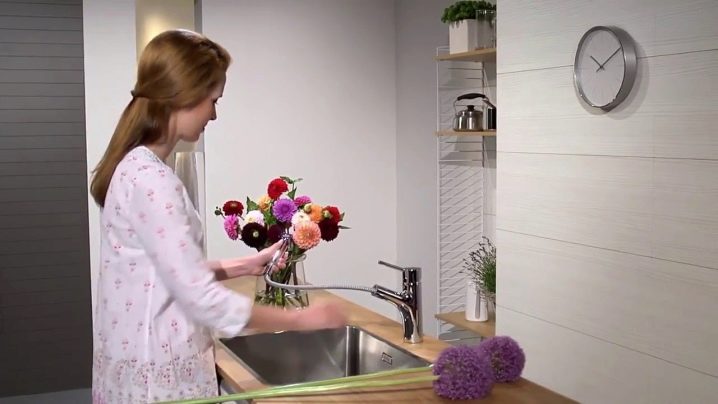 The pull-out device has the appearance of a conventional mixer. At the end of the gander is a special nozzle, which, if necessary, can be pulled out. Such devices are stationary, that is, when pulling the nozzle just increases the length of the gander by 5-15 cm. In this case, in some models, the extended spout of the crane can be movable. Another option is with a flexible hose. The length of such a hose can reach 1.5 meters.

Among the advantages of these types of mixers are the following: 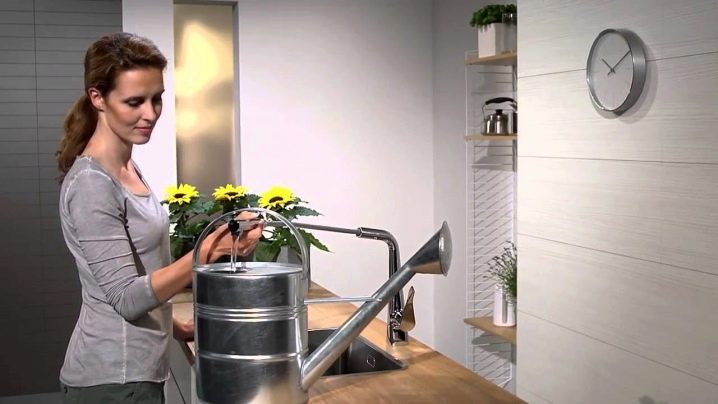 Pay attention to the material of the product, which can be made of: 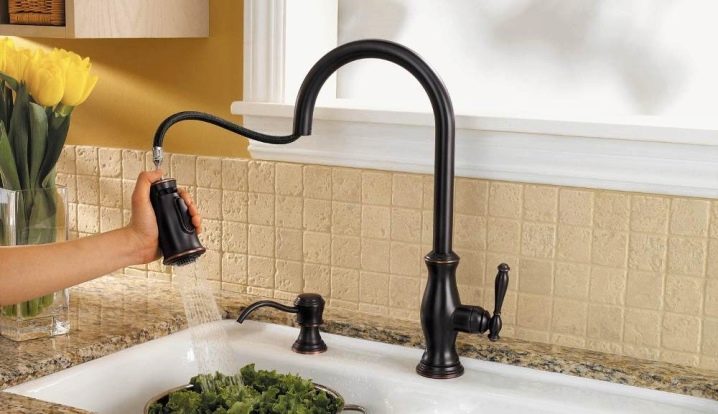 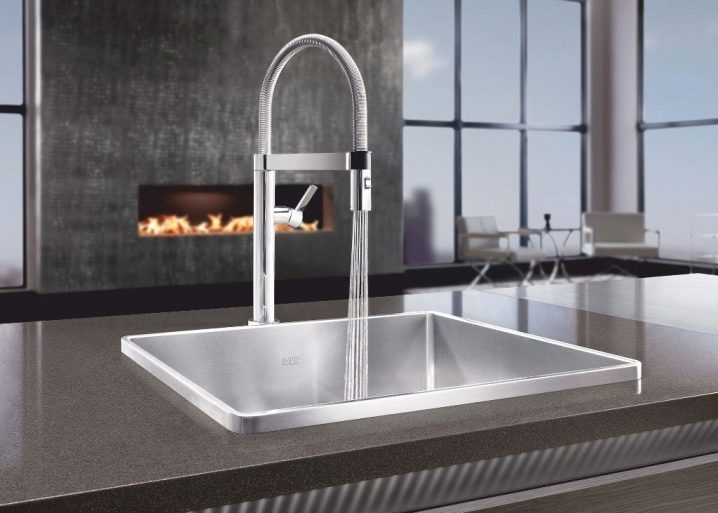 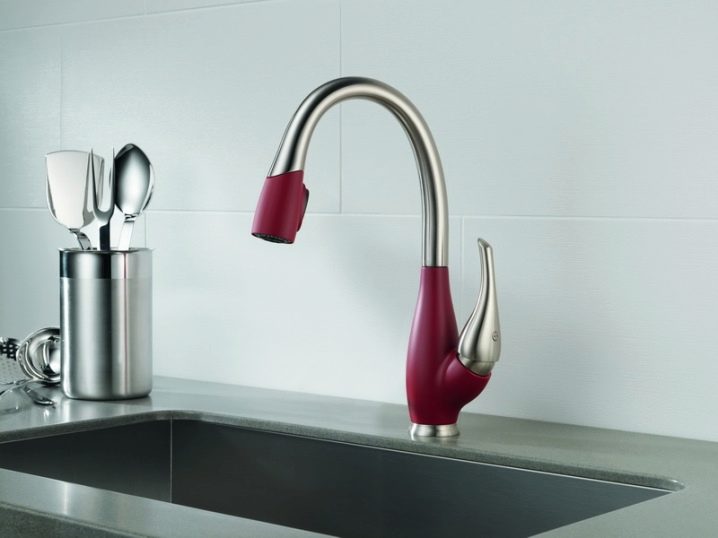 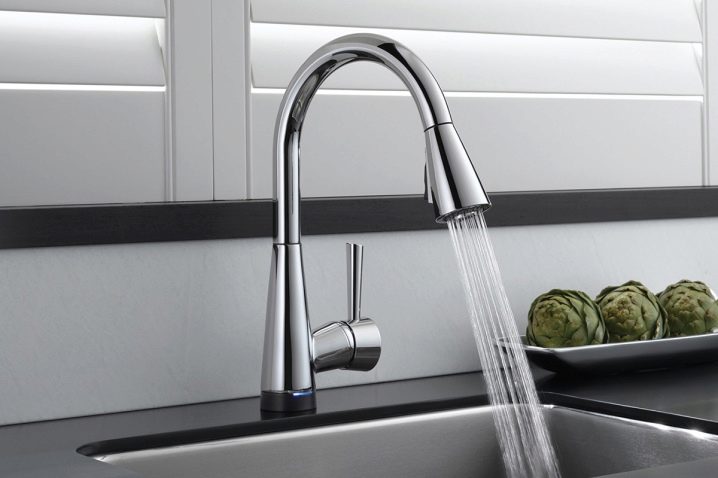 To pull the hose in the device with weights will require effort, but his hands will be free to work. In the second variant, it is easier to pull the hose, but you have to hold the switch with one hand so that it does not go back. This means that one hand will be busy. 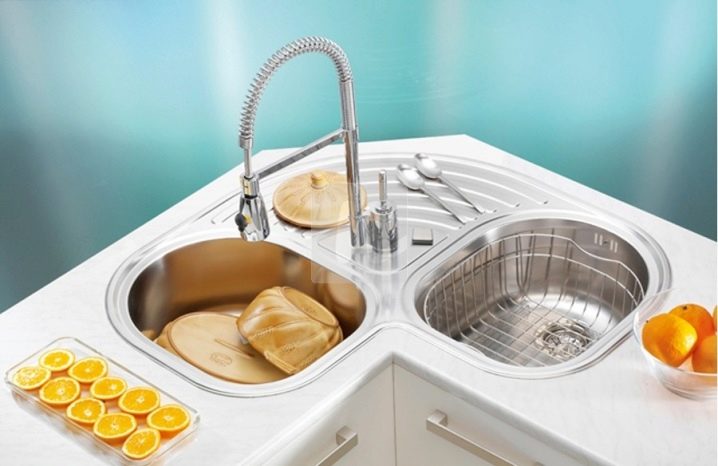 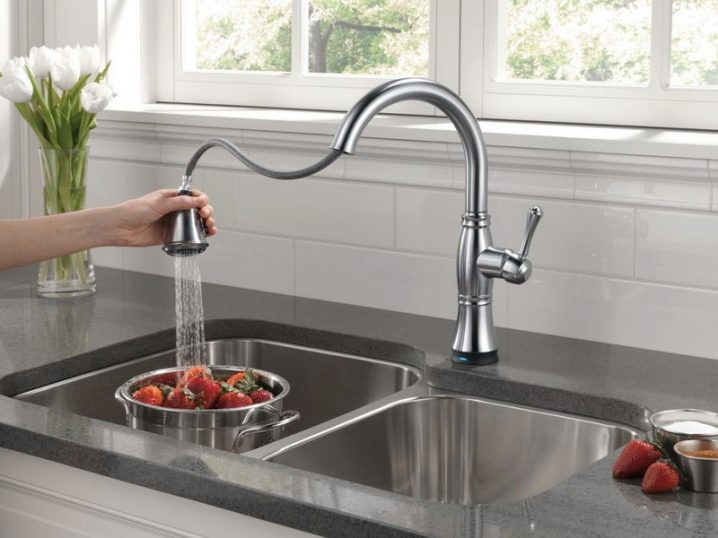 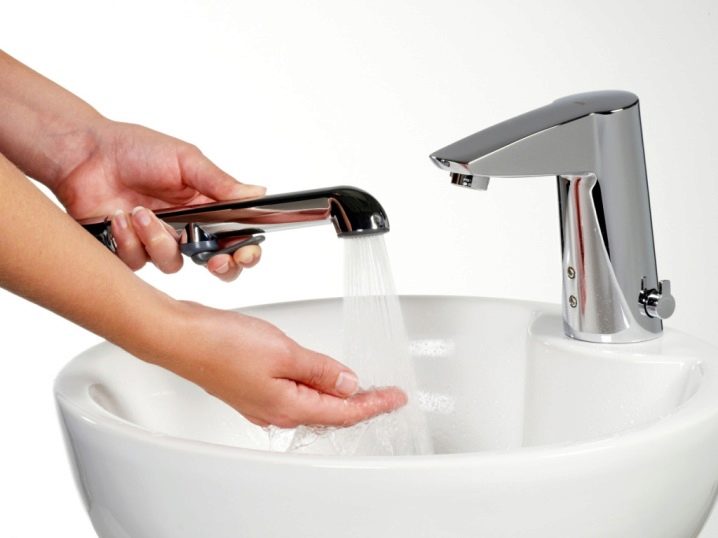 Angle of rotation of the spout

Cast It is considered the most reliable, since the entire mixer is a single device without seams. 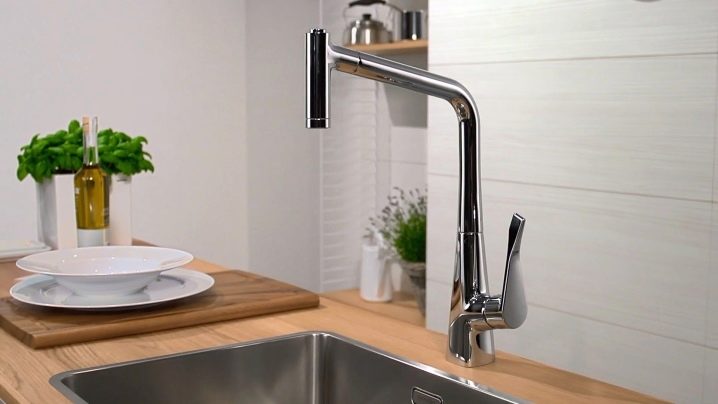 Prefab consists of several parts of it. The wear resistance of such a mixer is lower than in cast structures. 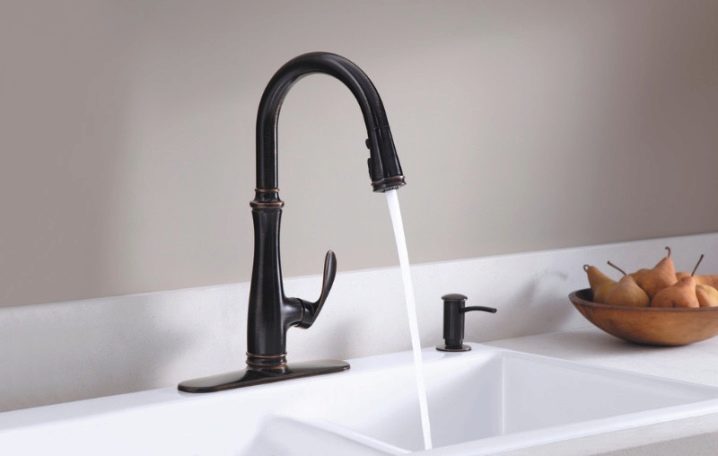 Outwardly, it usually looks like an extra tap. Water in such a system is cleaned with a special filter. 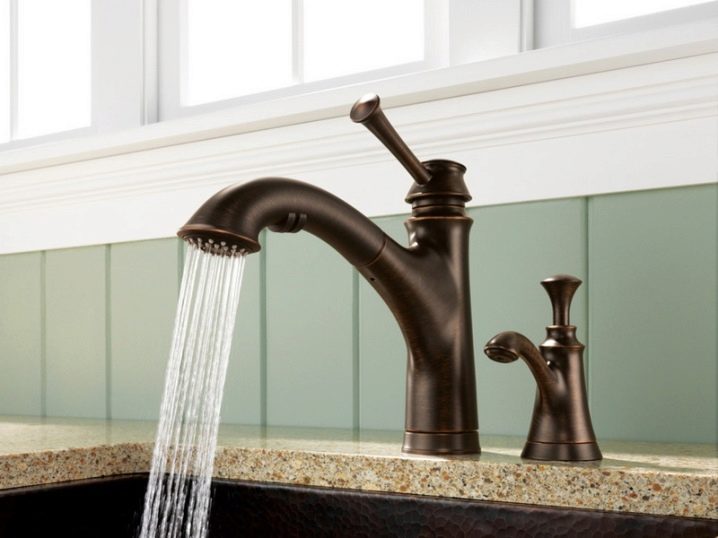 The presence of the switch types of water supply, which is a point or a shower.

Flexible eyeliner is considered less durable and consists of polyethylene or polyvinyl chloride with a plastic base and a metallic coating. Such a liner is easier to install. 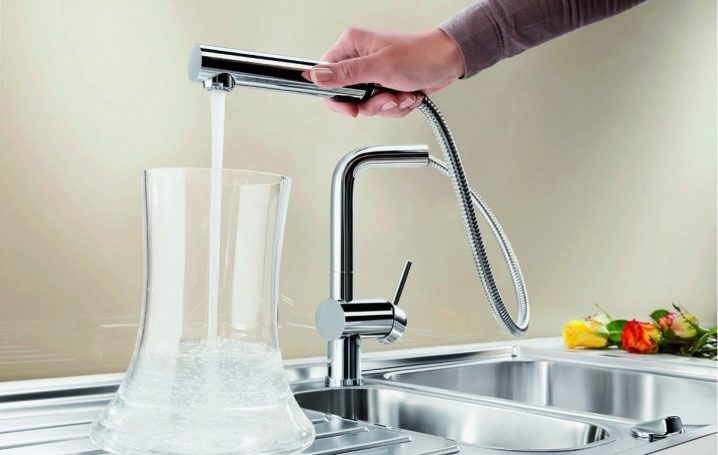 Hard liner is a metal or brass tubes. More reliable option, but more trouble to install. 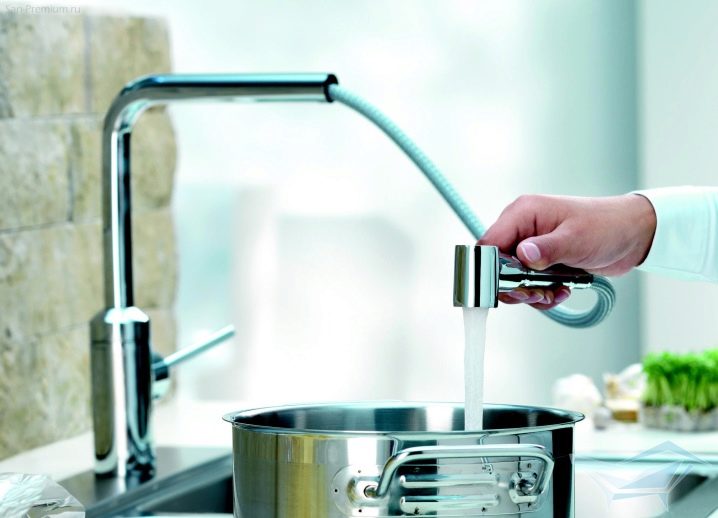 The mixer can be attached to the tabletop, sink, or wall, which saves space.

Those users who have already managed to try out such innovation as a mixer with a retractable spout, note the high functionality of the product and ease of use.

Thanks to this device, it is now possible to bring the crane to the tank, and not vice versa, while avoiding splashes. In the opinion of users, it was much more convenient to wash the sink, since the spout can be brought closer to any point of the sink. 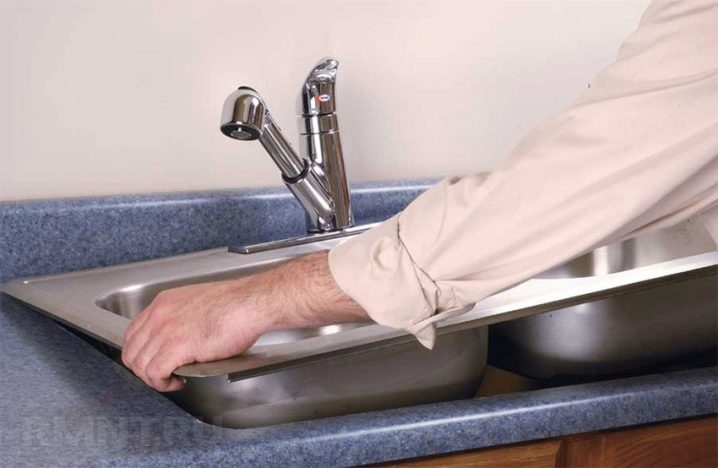 Such delicate fruits like grapes or, say, peaches need careful washing. Shower watering is very saving in this case.

And the water purification system for drinking needs eliminates the need to buy drinking water, which, according to consumers, significantly saves the budget. 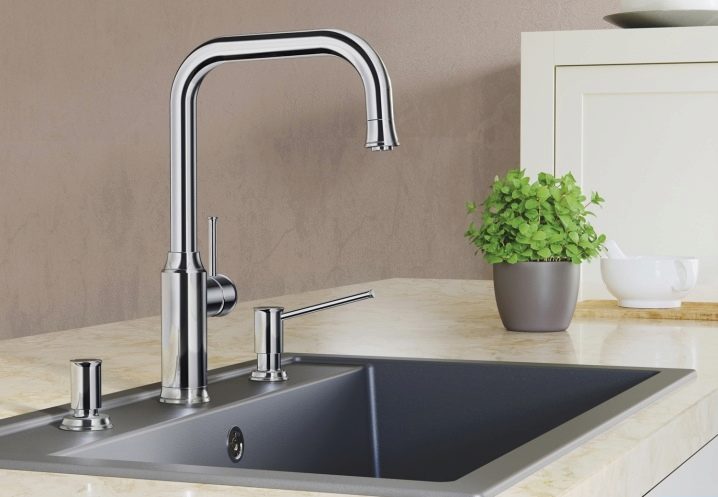 In some models, it forms a leak from the watering hole when turned on, which, even with the full range of advantages, can not but upset users. The problem is indicated by reviews of the Talis S model 32841000 of the German company Hansgrohe. Also, users note the low durability of the medical part of the device. After a short time it was on this part that many consumers had cracks. Although the price of such a model ranges from 16,000 to 30,000 rubles. 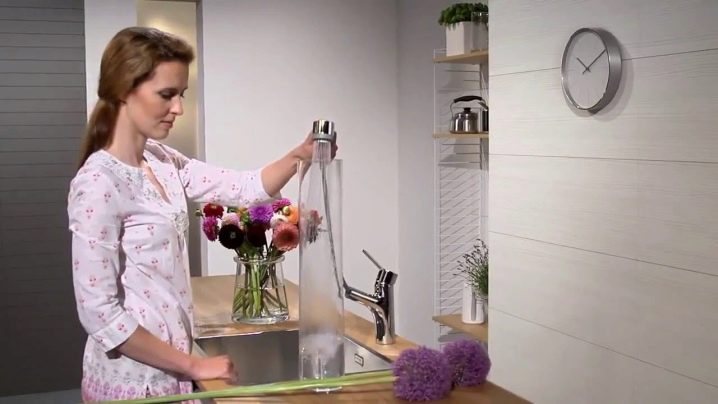 The weakness of the return spring is also often noted by consumers in the Eurostyle 31126002 model of the German company Grohe. Thus, when buying, pay attention to this part of the device. 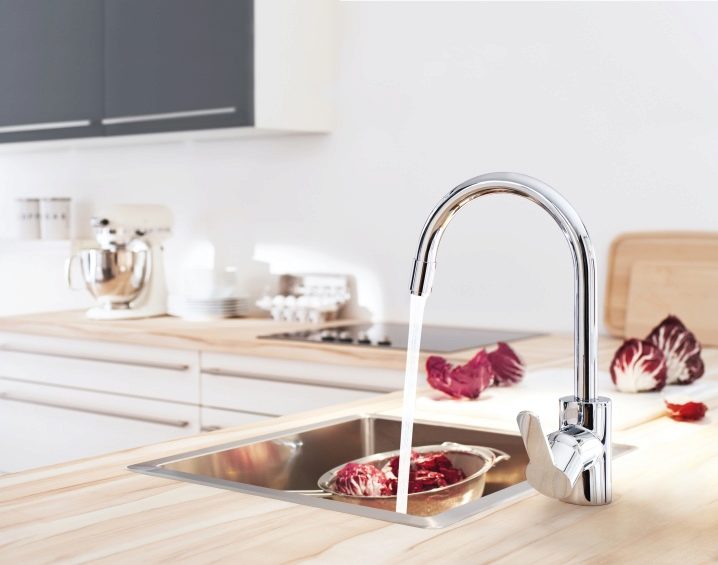 In general, among the disadvantages of users most often note the high cost of the product.

Among the manufacturers of this type of mixers can be identified firm Blanco. In a diverse product line of this company there are models with relatively inexpensive cost compared to other options. The price of such options ranges from 5,000 to 10,000 rubles.

Interesting in the section "Kitchen"

Quartz sinks for the kitchen 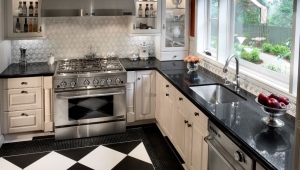 Kitchen Kitchen with sink by the window 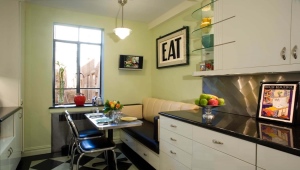 Kitchen Kitchen area of ​​10 square meters. meters with a sofa

Kitchen furniture do it yourself

Disposition of the kitchen as a dining-living room 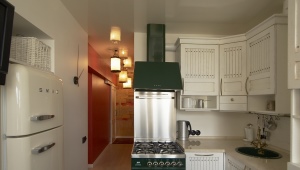 Design a small kitchen area of ​​4 square. m with fridge