Features of a two-component adhesive 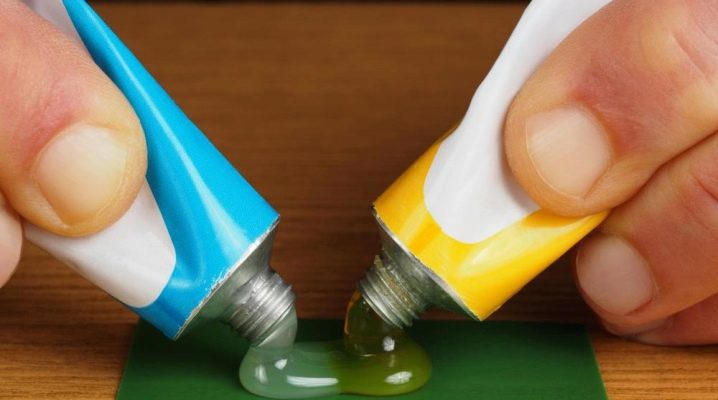 When carrying out construction and repair work, as well as for domestic purposes, an adhesive of increased strength is often necessary. This is a two-component polymer-based adhesive, whose fixing abilities are due to the peculiarities of the chemical reactions between the two components of this composition. 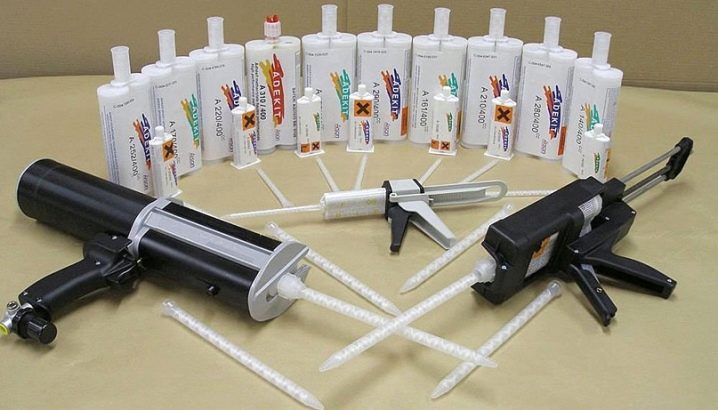 Two-component adhesive is a composition of polyester compounds and hardener, which are mixed before use in the required proportions. Both components are polymers, however, I demonstrate my ability to reliably fix elements only when mixed in a given ratio. As a rule, it is 9: 1.

After adding to the polymer component mixture is thoroughly mixed. using a construction mixer until smooth, after which it is to be used immediately.

This adhesive composition has improved adhesion to various bases. It is suitable for fixing parquet, but also laminate, parquet flooring, parquet boards and mosaics, and can also be used in the process of flooring underfloor heating, facing horizontal and vertical bases.

The lack of water (which causes the deformation of wooden coatings) and solvents makes two-component adhesive safe for all types of flooring and flooring. In addition, the composition is different elasticity, so there is no damage to the parquet when changing its geometry during the "jumps" of temperatures and humidity levels.

Glue is not afraid of moisture (does not absorb, does not collapse, does not lose its characteristics when in contact with water), is a dielectric.Glue is produced in a plastic bucket (emulsion is contained here) and a plastic bag supplied with it with a hardener in the form of a powder or liquid.

Depending on the characteristics of the composition of the two-component adhesive is the following types:

The composition is based on polyurethane, which ensures its improved elasticity (up to 30-40%). In addition to elasticity, it demonstrates environmental friendliness (today it is possible to find a hypoallergenic modification on sale), it does not emit an unpleasant odor during application and drying. Elastic and non-shrink, suitable for all types of wood.

In addition to polyurethane, contains epoxy, which reduces the elasticity of the mixture to 15-20%. It is characterized by an unpleasant odor and the release of toxins in the process of application and drying, so work can only be carried out in well-ventilated areas.

Used for small parquet boards up to 15 cm wide from resistant wood, and also fastenings of plywood (for example, under a heat-insulated floor). In the latter case, you can refuse to fix with screws due to the improved strength characteristics of the adhesive.

The thixotropic composition with the addition of epoxy resins is also suitable for facing works - fixing tiles and mosaics.

Acrylic two-component adhesive is not suitable for use in conditions of low humidity and negative temperatures. In this regard, it is not recommended for outdoor use.

It is characterized by long-term viability, and, as a rule, it is used in the factory (its special type is produced - 3M, applied with the help of special equipment), in the repair and strengthening of engineering structures.

Two-component adhesive is suitable for those cases when it is necessary to provide improved adhesion of various surfaces - wood and concrete, metals, leather, glass, etc.Epoxy-polyurethane composition is well suited for bonding non-porous materials (except synthetic ones).

This glue has increased strength when metal powder is added to it. By its qualities, it begins to resemble "cold welding". When fiberglass is added to the composition, its strength characteristics and resistance to vibrations also significantly increase. This allows the use of epoxy-polyurethane glue also for the repair of mechanisms, machines. It is suitable for aluminum, cast iron, iron, but cannot be stacked over galvanized and copper surfaces.

The absence of water and solvents in the composition, as well as abrasion resistance, thixotropy (no shrinkage of the seams) make it optimal for gluing wooden floor coverings, in particular, laying parquet flooring, massive parquet board and parquet mosaic. It also allows you to securely fasten plywood to concrete and other surfaces without the use of fasteners (nails, screws).

Two-component compounds withstand high-temperature impact well, therefore they are used when organizing a heated floor system.There is also a variety of two-component polyurethane compositions that are used as sealants. With their help, it is possible to eliminate minor seams. The ratio of emulsion and hardener in this product is 1: 1.

Due to the strength of the joint, which guarantees the use of a two-component adhesiveIt is used for laying tiles and mosaics, including heavy ceramic. Installation of tiles can be carried out both on a horizontal and vertically oriented bases. Tile glue usually has a slightly higher viscosity.

Strength and adhesive indicators of two-component compositions are so high that they are used to connect the stone, natural or artificial. As you know, this material has a large weight and porous surface. However, a two-component product is suitable even for gluing marble, granite.

Crashed glass products will easily return the former shape due to epoxy glue. This composition is transparent, so the traces of repair will remain hardly noticeable.

Finally, two-component compositions because of their strength, moisture resistance and safety are used in the repair of shoes. In shoemakers' workshops, they are used, first of all, for gluing the sole, heels and other elements. Such glue will be suitable for repairing leather and suede accessories.

Despite the wide scope of application of the two-component glue, it cannot be used in places of high humidity (laying of parquet in principle is illogical in such places). If there is a possibility of a capillary rise in moisture, then this adhesive can be used only under the condition of high-quality vapor barrier.

Do not use glue in rooms with high humidity and at low temperatures. In this regard, it is not recommended to conduct work in rooms where windows and doors have not yet been installed, as well as at low temperatures outside the window (abrupt “jumps” are possible during ventilation).

Among the most well-known brands of two-component composition distinguish "Uzin MK 92 S". In terms of its technical characteristics, the “Poxipol” version is not inferior to it, the peculiarity of which is the stunning adhesion indicators - it seizes even under water.

For gluing heavy surfaces (metal, titanium, concrete) the construction market offers the composition "Universal 302". An important point - this tool is not suitable for surfaces based on zinc, copper, polyolefins, celluloids.

For light metal, as well as plastic, wooden bases, you can use Interbond all-purpose adhesive. One of the components of the composition is produced in the form of a viscous paste, the second has an aerosol form of release. Each of the components is applied to one of the glued surfaces, after which they are applied to each other.

An interesting texture is characterized by the product “Akfix 705”. Its uniqueness lies in the fact that the glue does not flow down, and therefore it is very convenient for attaching facing and other materials to horizontal surfaces. It is used for plastic and wooden, leather and rubber coatings.

3M glue has increased strength and improved adhesion, resistance to high temperature effects and vibrations.Due to its technical characteristics, it is used in industrial conditions, although it can also be used for domestic needs if necessary.

For metal surfaces, you can use Scotchkote 2-component polyurethane adhesive, which is able to harden even at low temperatures. A distinctive feature of the composition is also provided by the anti-corrosion effect.

When choosing a specific composition, one should take into account the type of work (whether it is necessary to glue 2 parts, install the floor system, facing or other types of work), as well as the types of materials to be glued, their homogeneity or different patterns.

Gluing parquet on a two-component layer can not be called an overly complex procedure. Usually, the instruction attached to the product explains in detail the sequence of work.

Special preparation of surfaces allows to prevent decrease in adhesion of glue. Substrates must be clean and dry. If they have cracks and irregularities, they should be eliminated.

To improve the adhesion of the material allows the preliminary application in 2 layers of primer composition.The latter should be given time to dry completely, after which you can proceed to fixing the parquet. 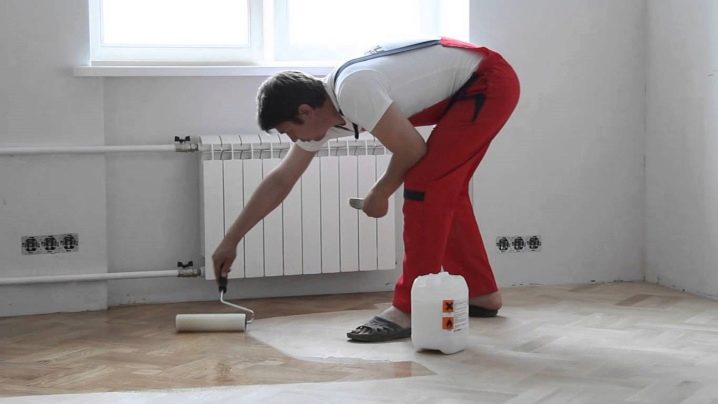 It is important to properly prepare the glue - a hardener is laid in the viscous polymer composition, after which the whole mixture is kneaded. Water, solvents or other liquids are prohibited.

Some formulations when gluing two elements do not need to be pre-mixed. In this case, an emulsion is applied to one half, and a hardener is applied to the second part. The chemical reaction starts after pressing the parts together.

When determining the amount of mix for mixing should be considered its viability. On average, it is from 45 to 90 minutes (you need to look at the package in more detail), so you need to dissolve as much glue as you can use during this time. 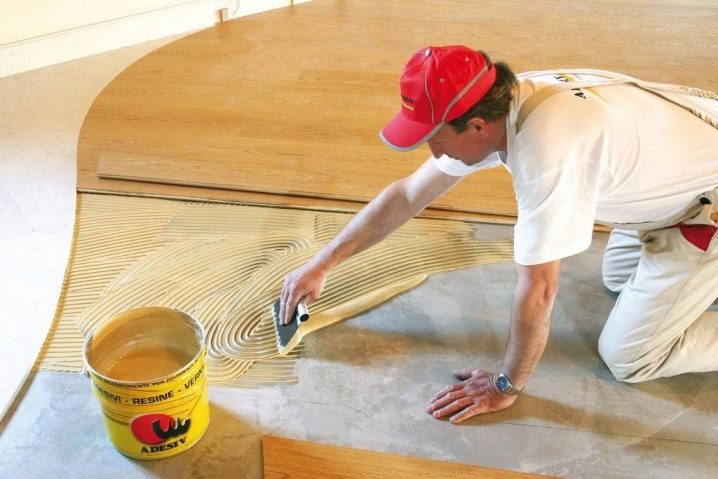 You should not try to "reanimate" the composition after the expiration of its viability by adding solvents, polymer or water. This will make it unusable.

Ready glue with a notched trowel is applied to the working base. Better to do it in small squares. After the parquet is fully laid on this site, you can start applying glue to the next “square”, etc.

When laying wooden elements, it should be remembered that they are prone to temperature changes in geometry, therefore, parquet boards are mounted with a gap of 1-2 mm. Mounting parquet, lamellas are recommended to be tapped. This eliminates the risk of voids beneath them.

This super-durable and strong composition dries for 24 hours; after this time, you can start sanding the floor and applying varnishes on its surface.

If glue gets on foreign surfaces, immediately remove it with a cloth and wipe the surface. After curing, it is necessary to scrub the stains with a solvent.

In case of contact with skin, wash the affected area immediately with running water. If allergic reactions occur, as well as glue on mucous membranes, you should see a doctor as soon as possible. To prevent such situations allows the use of gloves and face protection during operation.

Do not refuse to use epoxy-polyurethane glue due to the content of unsafe components. The toxicity of the two-component composition is manifested exclusively at the time of application, as it fully evaporates, as it dries.

On the features of a two-component adhesive, see the following video.

Glue for wood: varieties of compositions and selection rules 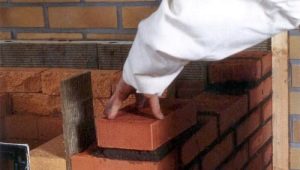 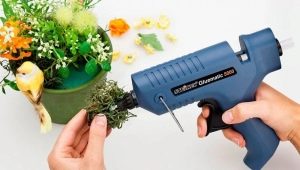 Construction adhesive Subtleties of operation of the hot glue gun

Features of polyurethane glue for wood

Liquid nails: what is it and which is better to choose?

Foam blocks glue: varieties, temperature of use and consumption 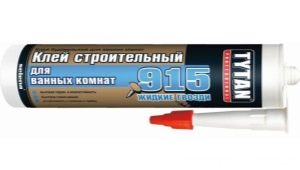 Construction adhesive Where are Titan liquid nails used in construction?

Aerosol glue: how to choose and use?

Glue for gas silicate blocks: how to choose and how to use?