Film for greenhouses: features of choice 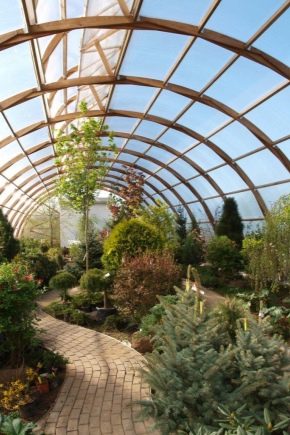 More recently, the film coating was the most common in order to equip the greenhouse. But today it is being squeezed out by glass and polycarbonate coatings, surpassing the film in its properties, but they cannot boast of low cost. If desired, it is possible to obtain products from the bed and under the film coating of the greenhouse, which will require the ability to choose the film, because one film differs from another in many ways. Manufacturers offer the most basic types of simple plastic films, as well as improved reinforced, PVC and stabilized coatings. Moreover, some sellers are almost trying to give out cheap types of materials for their expensive counterparts for the reason that the appearance of some types is very similar. 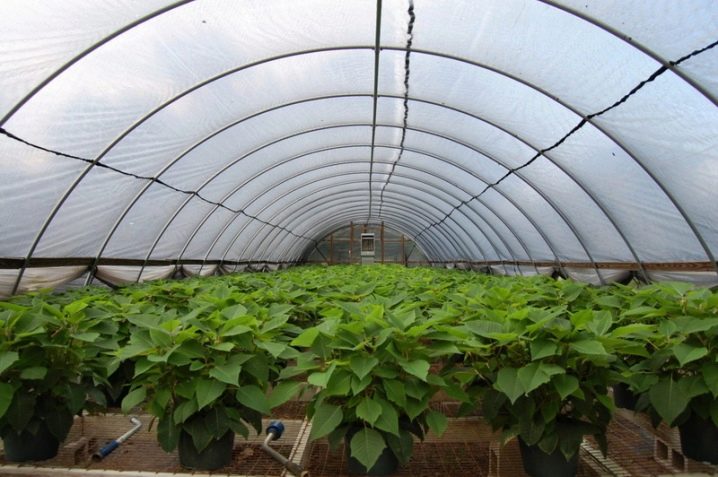 To solve a problem, you need to take into account a number of factors:

There are also marketers who tend to be silent about the shortcomings of a particular film and unscrupulous employees of retail chains, seeking to fool low-quality goods to uninformed customers. So you need at least a little understanding of the characteristics of materials. We invite you to get acquainted with the types and characteristics of films.

Polyethylene film is used in the cultivation of greenhouse crops, and during construction work, and in the packaging of various goods. It must be said that each roll film can be used to cover the greenhouse. For example, at first glance, a strong film produced from low-pressure polyethylene is of low strength and does not tolerate a temperature jump and the radiation of the sun. It is subjected to deformation and break literally a couple of months in the summer,and guaranteed cracked, if the temperature drops to -15C in the winter cold. 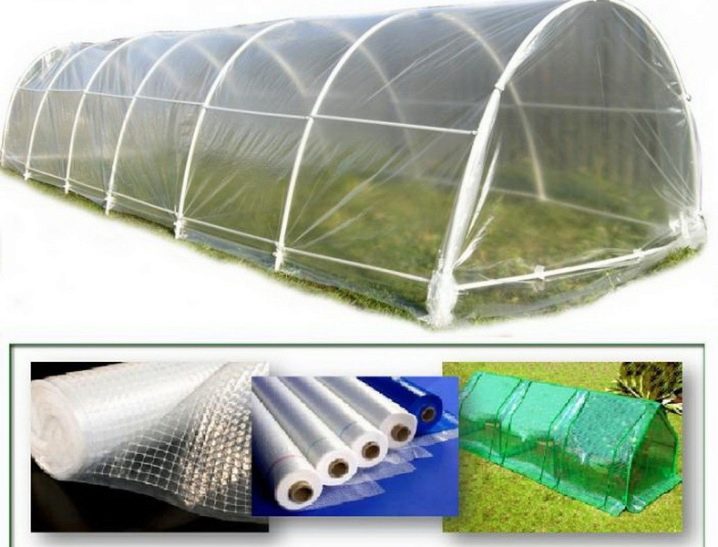 Usually, film coatings are distinguished by many criteria:

Consider some of the types of film and their more detailed characteristics.

One of the main advantages of this coating is a relatively low price. Such a film coating can pass up to 80 percent of heat in both directions and for this reason does not very effectively keep the temperature gained during the day. With proper installation, high-quality polyethylene film coating will last one summer, and in winter it will have to be dismantled due to temperature differences, when the winds and the snow layer destroy the film.

The polyethylene coating is quite easily damaged by literally anything.for this reason, the transportation and installation of such a material must occur with a high degree of accuracy, since the increase in the smallest damage occurs at a high rate of "sprawl", this will greatly slow down the process of arranging the greenhouse. The film is sold in rolls with a width of 1-3.5 m, it can be single-layer or in the form of a sleeve.

When working with the second version of the film is cut from the side and get a wide single-layer version. As a type, the greenhouse is covered with a film without cutting the sleeve, which, however, will not bring a significant increase in service life. It is not for nothing that the bends of the sleeves are considered to collapse almost immediately, for this reason such places are strengthened from the very beginning with the help of adhesive tape.

Reinforced film coating has the difference from the usual polyethylene with a kind of frame, which is usually made of fiberglass. The coating is made by pressing, twisting, stretching the material. The standard thickness of the frame yarn is from 0.3 to 0.35 mm. The polyethylene base turned out to be the most durable during operation, so that it would transfer the radiation of the sun, sometimes additives are included in it.The main load falls on the structure of the frame, for this reason, greenhouses with such films are resistant to the effects of winds, snow layers and hail. The film coating protects the greenhouse if the temperature drops briefly down to five degrees below zero.

Coverage can last up to three years, however, some manufacturing companies set a time span of up to seven years. Here the requirements are dictated by the climatic conditions of the areas and the technical characteristics of the film. Sheeting with reinforcement have high maintainability: the holes are sealed with adhesive tape, there is no widespread "spreading" of damage. The main characteristic of the film here is not called its thickness, but how dense it is. The most popular film has a density of 115-210g / m2. Today, covers are being sold that have pores that ensure the impermeability of moisture to a greenhouse and at the same time do not allow the presence of oxygen "conservation" inside.

The degree of reliability and strength characteristics of the film with reinforcement also has “reverse sides of the coin” - the material has a relatively high price.Another unpleasant feature is the relatively low degree of light transmission compared to a standard stabilized coating. And the dirt (due to the relief of the material) is difficult to wash off, which does not add transparency to such a coating. 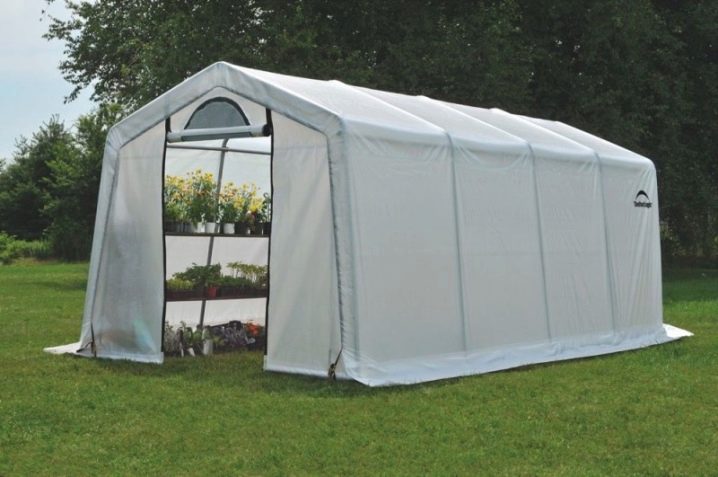 One of the best coverage in the construction of a greenhouse. It is an elastic and durable material, operated for 2-5 years, depending on the climate. It contains impurities (yellow, transparent, green, blue, black, color, etc.) that have light-transforming and stabilizing characteristics.

All this leads to the result that at night and with possible frosts in such a greenhouse a higher temperature regime will be established than in greenhouses with a plastic coating of the same volume and shape, which will be a significant advantage of such a film.

The disadvantages of PVC film are also.

With the introduction of special agents into ordinary polyethylene mass, the quality of its operation can be improved to some extent.

The factors of density and thickness of a film coating directly depend on how it will be affected by negative factors. If for a conventional polyethylene film a layer of thickness has practically no effect on the service life, then, if you mean stabilized materials, this means a lot. At first glance, the film thickness of 200 micrometers from 100 is almost impossible to distinguish. This is the cause of the scam of a number of unscrupulous sellers. In order not to become their victim, it is necessary to take into account the greater weight of the film of greater thickness,that is, the mass of a meter of film coating with a thickness of 200 μm is 530 g, (150 μm = 400 g, 120 μm = 320 g, 100 μm = 260 g, and 80 μm = 210 g). Greenhouses are more suitable film from 150 to 200 microns thickness. 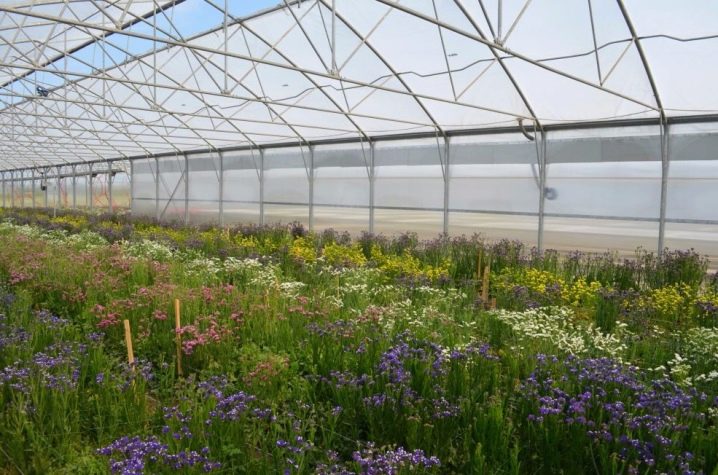 It is preferable to choose a transparent material that can miss a large amount of solar radiation. To obtain such a coating of different shades, dyes are always introduced, which lose their color under the rays of the sun, which has no logic. With the durability of the dye, the light gets into the greenhouse in smaller quantities and the yield will decrease, therefore, an additional lighting system will also need to be organized. The colors of the films indicate a useful characteristic that allows plants to assimilate the most favorable rays of the spectrum of the sun.

Any color additive is a spectromixer: 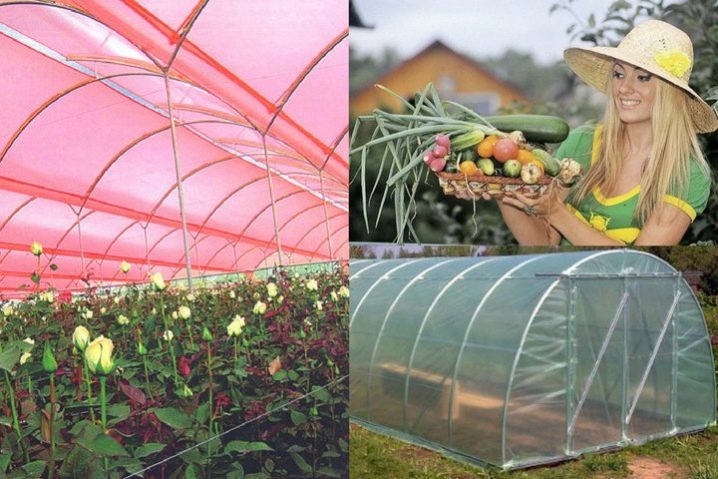 If the buyer chose a standard polyethylene coating, here he is minimally at risk when receiving a defective product.Most of the "fakes" can be found when buying in categories of coatings of high price segments. One way or another, it is preferable to purchase products from trusted manufacturers and closely monitor the accompanying documentation and labeling. China, Hungarian, Korean, Chinese, Israeli, Turkish products are on the market, and the following manufacturers provide high quality film coatings. 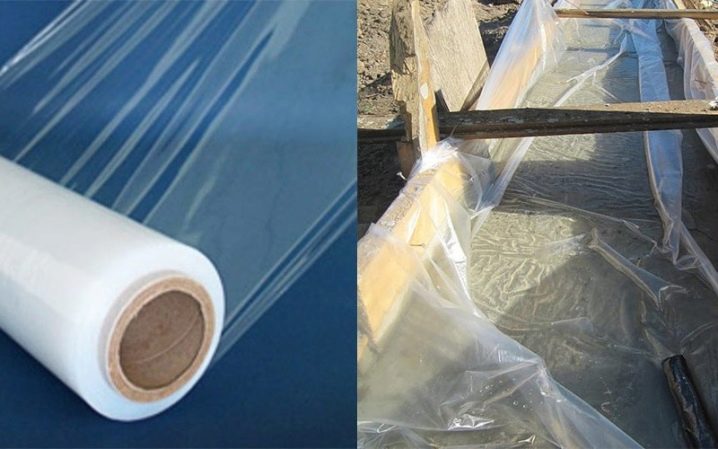 Which one to choose?

When choosing a film today, the buyer is offered a wide range of more advanced in its characteristics and quality film analogues, which has traditionally been the most common material for greenhouses. It is worth mentioning some of their advantages and disadvantages.

The main advantages are as follows. 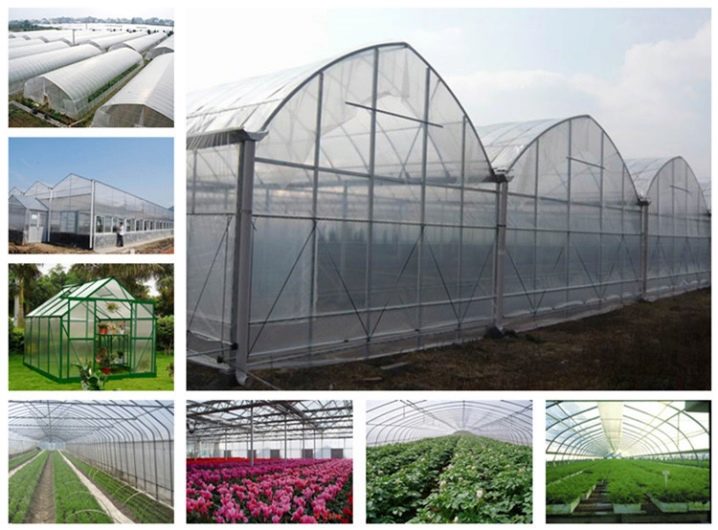 In any case, these rather significant drawbacks do not make the film less popular, as it is the cheapest way to build a greenhouse / greenhouse, and it may be more profitable to change the film annually than to spend big money on expensive polycarbonate.

It should also figure out how to properly solder, glue, stitch, connect, cover, fasten, solder, glue, pull the film on the frame.

Reinforcing frames are made of various materials: 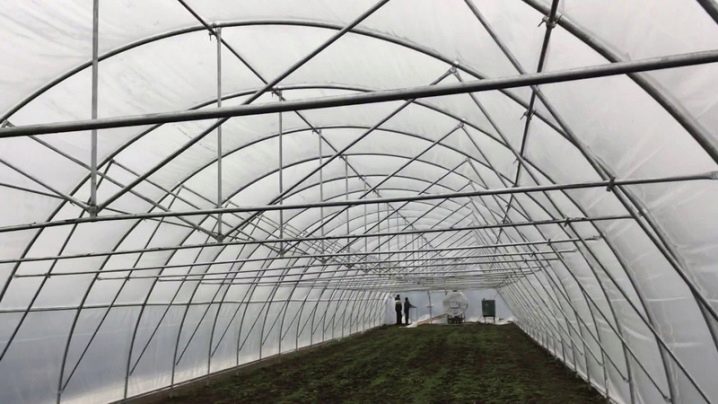 Fiberglass frames are found in our latitudes very rarely, they are almost never used. The construction process of a greenhouse usually takes place according to the standard scheme: components are selected, a supporting structure / frame is made of wood or metal, on which the chosen material is pulled. Note that the parts, the joints and the assembly of the frame itself, as well as the fastening of the covering material are important operations that must be carried out according to the technology. 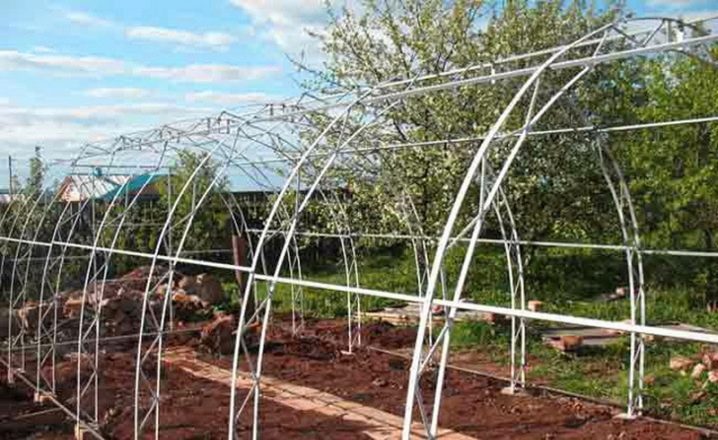 The wooden frame is preferably designed from coniferous wood, impregnated with any organic compound, to prevent the appearance of rot, fungus, damage from insects. Every detail should be properly cut, they should not be burrs, preferably, if the chamfer goes along the edge.Each connection must be glued or attached in another way, sunk into the structure to prevent the possibility of breakthrough covering material. 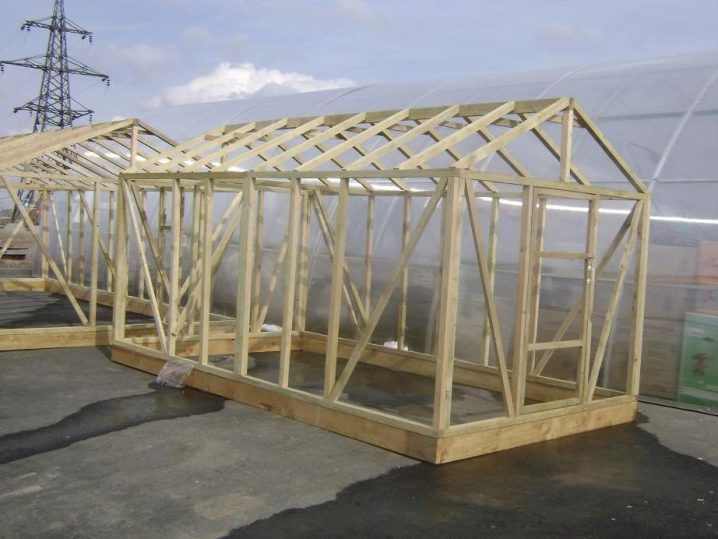 Any metal frame construction will necessarily heat up from the sun, so that the shelter is not subjected to deformation, it is recommended to provide on each guide strip made of wooden slats, self-adhesive tape, plastic panel of a small thickness. The use of double-sided adhesive tape will be a reliable barrier against overheating of the metal structure. Scotch tape helps to prevent deformation and, in addition, fixes the covering material on the frame structure. 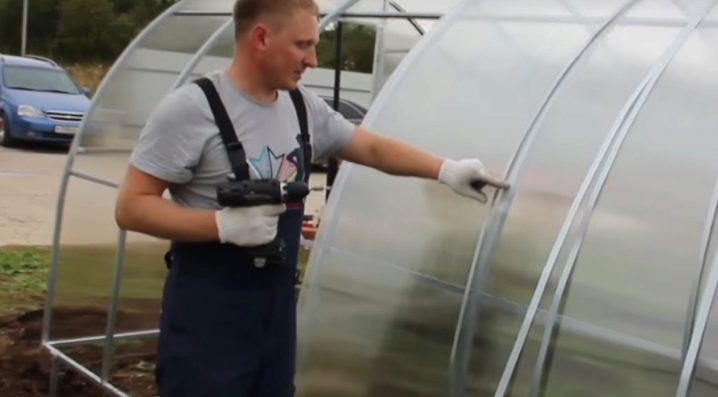 IMPORTANT! Greenhouses covered with films should be optimally installed using plastic or aluminum frames that are most suitable for the coating.

It is necessary to calculate the required area of ​​covering material in accordance with the size of the greenhouse / greenhouse. It should be taken into account in the calculations that the film in rolls should be laid with an overlap of 120-260 mm in each joint. In order not to be mistaken and not get a shortage at the end, it is advised to add up to 15% to the total surface area of ​​the greenhouse.When cutting material in size, it is advised to cut out each end piece, adding up to 260 mm for each attachment. To fix, you can use a wooden rail 20 x 35mm. 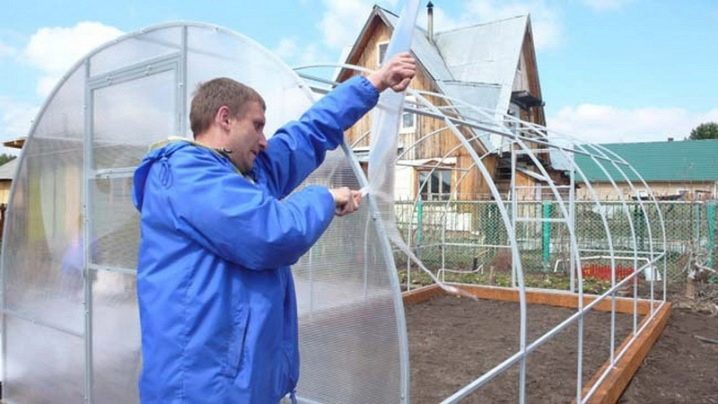 Council The folding clip can be made by hand using plastic pipes of various diameters.

As a rule, they first carry out installation operations on the main parts of the structure and only after that fix the film on the end parts of the greenhouse. The remaining parts of the coating at the bottom sprinkled with soil to avoid their gusts.

To extend the life of a greenhouse covering material, the following simple rules should be followed: 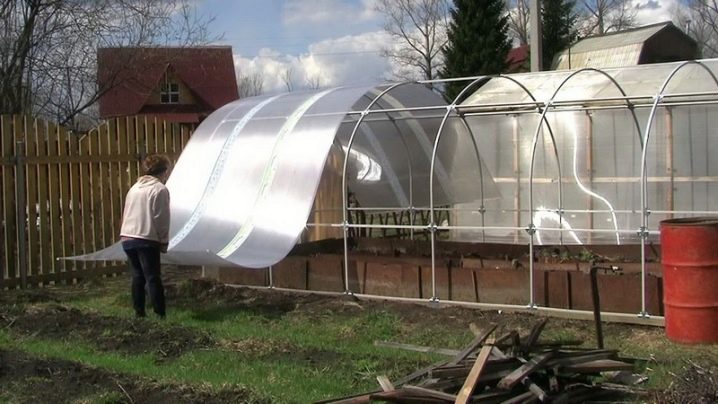 Even taking into account the fact that the film cover is not very durable and durable when arranging greenhouses, if you competently approach its purchase, the gardener has a good opportunity to spend minimal money and simultaneously arrange a greenhouse / greenhouse in accordance with all the rules. As a result, a good harvest will not take long.

About what film to choose for the greenhouse, see the following video.

Interesting in the section "Greenhouse"

The foundation for the greenhouse: types of bases and instructions for making

Furnaces for greenhouses: the types and features of the device 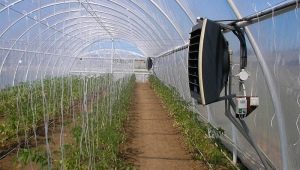 Greenhouse Heaters for greenhouses: types and features of the application 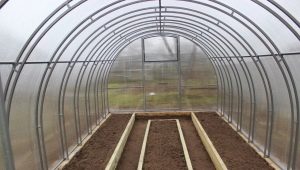 How to make a greenhouse?

How to choose the optimal size of the greenhouse?

The details of making greenhouses from window frames 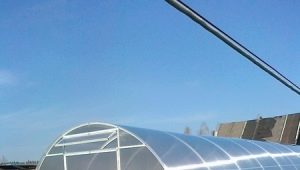 Arrangement of greenhouses inside: planning tricks