Features of the greenhouse "Tulip" with opening sides Primitive greenhouses, which do not provide convenient access to plants and do not withstand the load of snow in winter, are gradually being superseded by more sophisticated, durable structures. The attention of summer residents is increasingly attracted by the greenhouse "Tulip", which allows to get a rich harvest even on the standard six hundred square meters.

The greenhouse “Tulip” of arch type with polycarbonate aroused the interest of gardeners in Russia in the convenience of adjusting the walls and roof. In fact, this is a 5 in 1 system with opening sides and doors in the ends and with a sliding roof. And also on sale you can find the construction of "Tulip" mini, giving the opportunity to create a comfortable climate for plants. As in a large greenhouse, in a small analogue there is the possibility of free regulation of sections, which can completely or partially close the plants depending on the weather.

Due to the convenience of handling a mini-greenhouse, there are such opportunities as:

It is necessary to highlight the main advantages of the greenhouse "Tulip".

And also it is worth noting a few flaws or controversial points.

The skeleton of the structure is made of galvanized shaped tube.Polycarbonate, whose thickness ranges from four to six millimeters, tightly connected to the arcs and transverse strips. This is a feature of the so-called "Crab" system, which allows you to distribute the load from the outside evenly over the entire area of ​​the walls. The walls themselves are easily moved and fixed at the desired height in this sliding structure thanks to convenient guides. You can raise and lower them in separate sections.

The width of the “house for plants” is three meters, the height is just over two meters. You can choose the length depending on the scale of the landowner's plans for the future harvest. There are options for greenhouses from four to ten meters in steps of two. Doors are provided at the ends of the insulated house for vegetable crops. Each is equipped with a vent. The doors are about one meter wide, which makes it possible to freely pass a garden wheelbarrow into them.

Thanks to the Tulip device, greenhouse crops can be serviced both from the inside and the outside - it is enough to move the wall back so that it is convenient to pick fruits from the “outer” side of the bush or, for example, to remove the stepchildren.

There are various variations of greenhouses with a sliding roof.

Having installed such a greenhouse, it is necessary to provide around a bit of free space, since polycarbonate sheets, removed from the roof, take up space, and walking around can be inconvenient. If we compare this option with the Tulip, the arched greenhouse in this sense has many advantages for many growers.

The location of the greenhouse on the site, including with the opening top, affects not only the convenience of its use, but also the harvest. Choosing where to put it, you must bear in mind that it should be installed at a distance of three meters from the nearest one-story buildings. Then the "neighbors" will not create a shadow for the plants. The same must be considered when it comes to tall trees. In addition, you need to take into account the peculiarities of their fairly powerful root system. If you install a greenhouse in its immediate vicinity, the inhabitants of the "house" will receive less of the required amount of water.

The long wall of the structure is preferably oriented from west to east, which will allow vegetables to absorb as much sun as possible. It is necessary that the design does not fall into the zone of drafts.Contribute to a successful placement can cover in the form of a deaf fence, for example, from a metal profile. The ground under the greenhouse must be fairly stable so that the greenhouse does not warp if it is installed without a foundation. It is advantageous to choose a place for accommodation, taking into account the proximity of the water supply system and outbuildings to which the harvest can be quickly and without unnecessary stress.

From year to year, a greenhouse without a foundation can be transferred to different places (especially if it is a mini version), depending on which crops and on which beds have grown before.

When installing a greenhouse, you need to decide whether it will be mounted on a concrete base or it is better to do without a foundation at all. If you build without a base, insects and rodents, like weeds, will not have obstacles in their path and will be able to safely make their way inside. Although, using one trick, it is still possible to compensate for this shortcoming. In addition, some of the heat that accumulates inside will inevitably be lost. If the greenhouse is used only in the summer season, there is no need to worry about its losses.Solar energy is a non-empty waste of money.

Many prefer not to complicate the matter of installing the foundation. It costs time and money. Not everyone is ready for them. In addition, to put a greenhouse without any problems with a solid base, enough for a few warm days. When moving the building to another place, you do not need to think about how to dismantle the rest of the foundation.

When installing, consider the type of soil. To understand what it is, you need to dig a hole half a meter wide to a depth of just over one meter. It remains to determine which soil is in the interval between 20–80 centimeters from the ground level. If it is sand, it will be slightly wet and crumbly (nothing can be made of it), this type of soil will be the best basis for the greenhouse. Water will not linger in it for a long time, and the roots of planted vegetable crops will not rot.

If the soil is clay, you will have to make a small trench to a depth of half a meter. It is possible to pour sand from a river or a special quarry into it, but not to the very top, but in order to have enough space to fill the fertile layer, which also immediately needs to be brought and leveled at the site.If there was water at the bottom of the pit dug to determine the type of soil, it is better to dig out recesses around the future structure to drain the liquid. All these measures will allow to avoid a situation when manpower and resources are spent on the purchase and installation of a greenhouse, and the crop is lost.

For installation, you can choose the days at the end of the gardening season, when the site is freed from vegetation, or in the spring, when the planting of vegetable crops has not yet arrived.

The most favorable installation time is at a temperature of about ten degrees Celsius. Under these conditions, cellular polycarbonate bends best. It will not break, as it happens in cold weather, and it will not expand if it is fixed at a higher temperature.

The assembly instruction for a greenhouse without a special foundation is as follows:

The site under the greenhouse is allocated with a margin of one meter from the actual parameters of the selected factory option. The height difference on it can be within five centimeters.A trench is dug along the perimeter in such a way that the T-shaped supports fit into it. At the same time, only ten centimeters of the bottom of the frame should protrude above the ground line after installation. The bottom of the burial is compacted, the parameters of horizontality are measured, so that in the future it is not necessary to make supports at the corners of the greenhouse.

To protect the greenhouse "tenants" from the weed, the outer wall of the trench is to impose sheets of slate or roofing felt, not found other uses in the economy. To assemble directly the "skeleton" of the greenhouse, you will need a screwdriver and a wrench. The complete set of components from which the base is assembled includes both the fasteners themselves and the scheme by which all parts of the structure are connected. To build a skeleton for a polycarbonate installation, first you need to assemble the end parts of the greenhouse, attach door frames with vents and reinforcing strips to the arcs (although the end parts are sometimes sold in finished form). All this is bolted to the bottom strapping, and then the T-shaped legs are attached to it.

That part of the structure, which will be underground, you need to coat with bitumen.Then the ends should be installed in a trench and assemble the frame entirely according to the instructions. Mount the walls of polycarbonate sheets. If automatic vents are included in the package, install them too. The gap between the installed greenhouse and the ground line must be covered with soil to a height of 3-5 cm and additionally covered with a metal or opaque polyethylene strip, which will protect the planted crops from insect attacks.

Review the greenhouse "Tulip", see the video below.

Interesting in the section "Greenhouse"

Warm beds in the greenhouse: step-by-step instructions for making 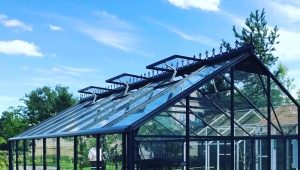 Greenhouse How to choose a covering material for greenhouses? 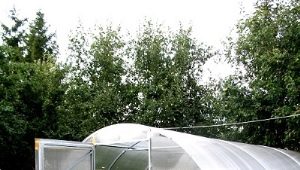 How to ensure year-round operation of the greenhouse: options for insulation

Greenhouse thermos: how it is arranged and how to make it yourself? 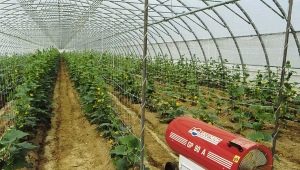 How to make a greenhouse from a profile pipe?

How to build a greenhouse from a bar?

How to make a greenhouse from polypropylene pipes?