How to choose a mortise mixer for acrylic bath? 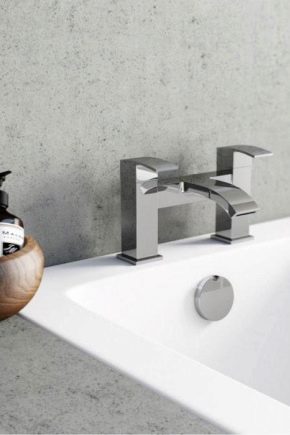 Once upon a time in Soviet bathrooms the “ball of the rule” was a bath made of cast iron. She held her position so firmly that nothing seemed to replace her. But nevertheless, the time came when a lot of comfortable, modern and functional sanitary ware appeared in the world. For example, light, but also quite strong bath of acrylic. And now a new stylish bath needs a modern laconic mixer. What and how to mount it? The article is about this.

Distinctive qualities of the mortise mixer

At such a mixer, for example, for a jacuzzi, the advantages abound. Due to the fact that most of the pipes and hoses are hidden, the appearance of the bathroom becomes more elegant and concise.In order to take a shower, you just need to pull the mixer out of the opening, and then easily return to its original position. The rest of the time, the hose is not visible and does not interfere, although its length reaches two meters. In the same way hidden and pipes, which receives water from the water supply.

The water jet turns out to be even and without extra splashes, due to which it is much more pleasant and comfortable to use such a device, and the powerful pressure allows you to fill the bath much faster than many other mixers. Famous companies for internal mechanisms used parts made of ceramics, which last longer.

Mortise mixers give more freedom to be mounted on a bathtub or at an angle. How it will be more convenient. You can also mount the device on the wall.

Features of this type of mixer system

The modular system of bathroom-mounted faucets differs from those mounted on the wall. The device can be made of one unit, but not everyone can like it either externally or in terms of convenience. In the mortise mixer system, great importance is attached to the node that controls the flow of water, that is, the faucet. This part is in its own case with at least three outputs.Two of them are designed to connect water from the water supply. And to the third one, where the jet of already mixed water is supplied, a weir is connected, which can be placed both near the tap and at a distance from it. The watering can of the shower, if any, is also connected to the tap separately and equipped with a special shift lever.

The shower hose, hidden under the bath, should be freely pulled out from there, and then returned to its place after use. It is not necessary to switch it back, such a shower usually turns itself off. Modifications in which all modules are connected are less popular than separate modules. They can be more freely placed on the bathroom. The material used for the mixers is solid chrome-plated brass, which reflects light like a mirror, which not only looks good, but also protects against corrosion. The warranty is given for 5 years, in case of modification of the highest quality.

Faucets are fastened with eccentric half-inch with a normal thread. Quality models of famous brands are able to endure hydraulic shocks under pressure up to 9 bar. Also, such devices are provided with ceramic parts, cartridges, which have a long service life.

It makes sense to consider such a practical solution as the ability to put a wall-mounted, ordinary faucet on board a bath. It will take 2 pieces of mounting angles. The most important components and parts requiring special attention are as follows. Must be made of brass or stainless steel. Sometimes silumin comes across, but it is famous for its fragility, sometimes they even say that it is a plumbing nightmare. The silumin case is able to collapse already during installation, what to speak of further exploitation.

As mentioned above, inside the mixer, where mixing and water pressure are regulated, there should be special parts made from ceramics. They are also called crane-axle boxes. With proper installation, they will last longer than their rubber counterparts.

And in the shower switch, a similar mechanism is also good. Such a switch is called a ball. It is famous for the fact that its handle can be rotated to all 360 degrees, as well as reliability and durability. Only one minus of the ceramics inside the mixer, it becomes clogged, and clogged easily breaks, but this is fixable with the help of mud filters. Otherwise, this design is extremely reliable. It is worth paying attention to the fact that the longer this part is, the more vulnerable it is. A long turning spout can be more maneuverable, but a short one is stronger and harder to break, hitting or hitting. In addition, the turning spout also has a more fragile fastening system with a rubber ring, which eventually leaks. So, if mobility is not particularly required, it is better to choose a short and unmovable.

There are two important points. It may seem that the installation of such a device is characterized by increased complexity. But in fact, an experienced specialist can handle in an hour or two, maximum three. It is already more difficult for a newcomer, since you will have to spend time carefully studying the instructions. Fortunately, they are always included with each mixer. But it is better not to make mistakes due to the fact that everything that is connected and mounted is located under the bathroom, in a place where access is difficult. It is better to do everything right away from high-quality parts and materials, from proven companies.

Those who nevertheless decided on an independent installation will need such tools: screwdriver, wrenches (set or one, but adjustable), electric drill with mills of the desired size. If there is a torque wrench, then it can be useful here. So, in the future we will talk about the sequence of actions of speed and quality for the sake of.

What you need to remember when marking the holes is how to optimize the length of the hose and convenient access to all faucet valves and shower head, because you will have to work in difficult conditions.After all careful measurements and selection of the optimal point for the holes, the marking is applied and you can begin to cut. For this, an electric drill with a crown cutter of a suitable size is used.

If it is not possible to drill holes, then this is not a reason to refuse a laconic mixer. When buying a bath, you can find out if there are options with ready-made cuts or about the possibility of cutting them out directly in the store. Anyway, the holes are ready. It's time to install the mixer. A small detail, in fact, is often forgotten about it - it is a gasket under the faucet, it comes in a set, you need to install it. Then fasten the construction of the nuts specially designed for this, there may be several of them. If a single-lever valve is mounted, then before tightening all the nuts, you need to install the half washer, it has the shape of a metal crescent.

The one-position mixer is installed, now you need to connect it to the water supply system, connecting it to the pipes with the help of rubber hoses. They can also be plastic or metal-plastic, but the best option is when everything is in a flexible sleeve,associated with special capes with silicone pads. So everything will be compact and protected, nothing will get confused and will wear less. Wall mounting, as an alternative

Another way to install without the need to make holes in the bath itself, arranging everything on the wall. Then all that is usually hidden under the bath, you will need to hide under the false panel on the wall. A false panel is such an ornament on the walls of a bathroom or kitchen, under which various communications are hidden. You may have to make niches in the wall to put the pipes and the hidden part of the mixer in them. You will also need to think carefully about the location of all pipes. Details are described in the instructions that come with each mixer in the kit.

They are all different, each of them has its own installation features, so in general terms, the technology for performing the procedure is as follows.

Self-embed mixer, though difficult, but possible. Especially if you already have some experience, skills and all the necessary tools. And also the desire to do your own hands the bathroom of your dreams.

In the next video you will find the installation of the mixer on board an acrylic bath. 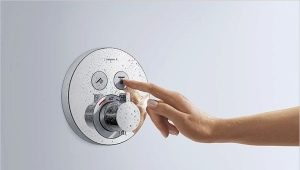 Bathroom faucets Faucets flush-mounted: the device, the pros and cons 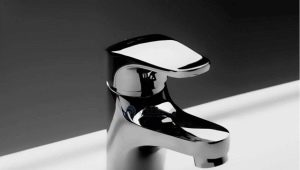 Subtleties of the process of replacing the mixer 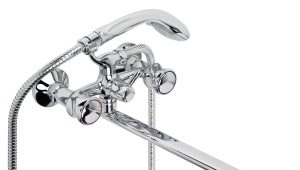 Mixer Damixa: pros and cons, tips on choosing a model

Flywheels for mixers: device and subtleties of repair