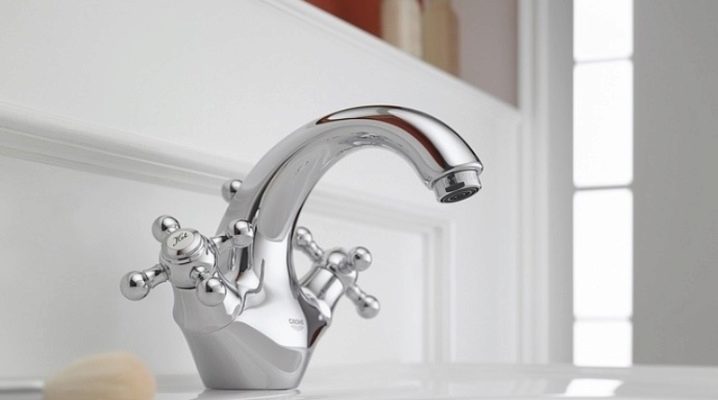 Every person wants his home to have the highest-quality and reliable plumbing equipment that could last for a long time. An important place is occupied by the mixers. Today we will talk about devices such as herringbone mixers.

Herringbone two-valve mixers belong to the simplest variety of cranes. But at the same time, they still enjoy considerable popularity among consumers. In the center of this plumbing spout is located, and on the sides are handles or valves, they are designed to open hot or cold water.

The valves are the main components of these mixers. Each of them is a crane-bush, which can be of two types: worm and ceramic. The work of the first type is based on the reciprocating movement of the rod.The work of the second type is based on two ceramic plates with holes, one of them being movable. When combining such holes appears passage for water.

The installation of such a crane is possible only if there are certain components. Therefore, in the same set with the mixer itself are some components:

Today, these two-valve cranes are very popular among consumers. After all, they have long earned the reputation of reliable and high-quality mixers. And also many buyers are attracted by the ease of use and the beautiful appearance of these plumbing appliances.

Such devices comply with all GOST standards and quality certificates.

All types of herringbone cranes have many positive qualities:

Despite all the advantages, herringbone mixers have their disadvantages:

Depending on the type of spout, the herringbone faucets are divided into several groups:

With a high arched spout

Such plumbing is usually used for washing the kitchen.The length of the spout can be 160-250 mm, the mixer itself has a height of up to 350 mm. These sizes of the crane allow you to easily wash all the dishes and products. Although the valves of the model are recognized by most experts uncomfortable. This type of sample Carlson 11053.

These faucets are most often used for bathtubs and washbasins. The length of the spout from them can vary considerably from 75 to 200 mm. Faucets with short curved drain are great for deep sinks. The height of the plumbing is 90-280 mm. One of the most popular models of these designs was the sample. Lotus LM2706C, manufactured by Lemark.

This type of faucet set in a bidet. Like other models, these taps have two valves. But at the same time between them there is a lowered short spout, the length of which can reach 90-115 mm. Such plumbing with a special rotary aerator having a net is produced, it is needed so that water is not sprayed. To structures of this type include sample IDDIS Elansa ELASB00I04.

This plumbing is used for baths and showers. As a rule, it is made with 2 flywheels.In this case, there are models at the same time with the spout, and with the shower, and samples, which, in general, do not have a tap, but only a hygienic shower. If you prefer to take a bath, then you better get the first option. A popular model of this design is a crane Gante 5262322m0, manufactured by Roca.

But also, experts often divide all herringbone faucets into the first and second groups. The first variety includes cranes that do not differ in special reliability and quality, but at the same time their price is small. They are made with an elastic gasket, which serves as a locking device.

Today, such a gasket is made of materials that contain a small amount of silicone, although before it was made only from rubber. Such new components make the element more durable and reliable, which increases the operational life of the part. The work of the models of the first group is based on the reciprocating movements of the crane-axle box.

Two-valve mixers of the second group are produced with a ceramic shutter (it consists of two ceramic plates) and have the best technical characteristics.For the water to come from the spout, the holes of the upper and lower plates must match. In this case, the first element, which contains aluminum oxide, opens and closes water due to rotation around its axis. The second element at work always remains motionless.

Mixer models of the second group are of better quality and durability compared with samples of the first group. They are characterized by a rapid adjustment of temperature. At the same time, the cost of such devices is higher, but affordable for almost every customer.

Today, such mixers are made from various materials. The most common of these is brass. After all designs from it turn out the most reliable and strong. They are not subject to the formation of corrosion and wear parts. The next material is bronze. Products from it also turn out strong and durable. But the carving on bronze cranes is made of brass.

Often, manufacturers use and silumin. It is an alloy of aluminum and silicon. This foundation is not strong, so the mixers from it will be short-lived and quickly break.

Often in the manufacture of these devices and take plastic.But it is also not a solid and durable material, so the mixers will not be able to serve for a long time. Although plastic is the most resistant to water, but it does not completely protect the product from malfunction.

Today, an increasing number of manufacturers prefer ceramic-based. It has the most attractive appearance. But, in fact, this material can be safely called fragile, so the structures made from it are constantly broken.

Herringbone taps are often installed in the perforation of the sink. Before the start of the work itself, it is imperative to shut off the water. After that, disconnect the outdated mixer. As a rule, do it with a spanner.

Then install the device using a collet (threaded bushing) and tighten the nut. This allows you to accurately fix the device to the sink. Only then can the structure be fixed to the water pipe and a sealant or silicone compound be applied for processing.

Sometimes after installing the mixer can be observed small stains. The reason for the leakage of water is loosening the nut.Therefore, it will have to regularly pull.

Installation of devices is also possible on the outlets of water pipes, which after installation are closed with a special partition. All fasteners in this case remain in the wall, and outside you can see the valves and spout. This type of installation has a serious disadvantage. If the structure begins to flow, it will be possible to repair the breakdown only by disassembling the wall.

All metal taps of herringbone models are coated with a certain coating. Often, nickel is used for this purpose. After all, he is able to resist corrosion. Put it on the outer parts of brass parts.

Chromium is also used as a coating. It does not allow pathogenic bacteria that live in the aquatic environment to multiply on the device. This application counteracts the deposition of salts on the plumbing. The cost of chrome structures is much higher than the rest. Some manufacturers cover the parts with colored enamel. It gives the product a beautiful decorative look. The special strength of this application is no different. Visible fissures and scratches quickly appear on the mixers.And while cranes with this coating have a rather big cost.

In the next video you will find the repair of the "herringbone" mixer with the flow of hot water through it into the cold water supply system. 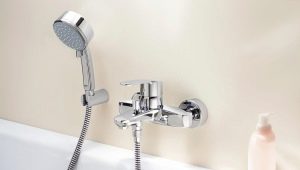 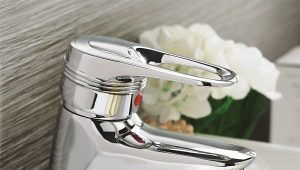 What to do if the faucet in the bathroom drips?

Omoikiri faucets: the subtleties of choice 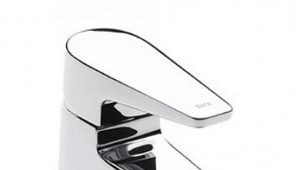 Features of the choice of the elbow mixer

Ledeme mixers: characteristics and advantages of the range